Kangana Ranaut On Raazi: 'Alia Bhatt Is The Undisputed Queen' 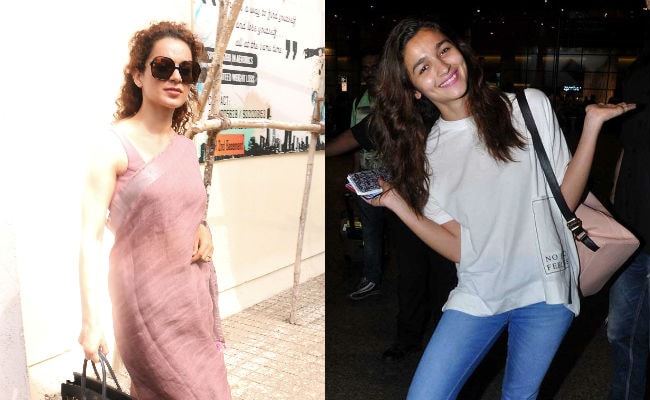 Kangana Ranaut (L) outside a theatre in Mumbai. Alia Bhatt (R) at the airport.

New Delhi: Raazi, starring Alia Bhatt, which recently crossed the Rs 100 crore mark continues to impress the audience and how. The film, which has been appreciated by film critics, audience and even members of the film fraternity, just got another fan and it is none other than Kangana Ranaut, who recently watched the film and thinks that Alia Bhatt is the "undisputed queen." The Queen actress, after watching the film on Monday, in a statement said: "I really liked Raazi. It was awesome. Meghna (director Meghna Gulzar) did a splendid job with the film. I think her film is going to cross Rs 100 crore at the box office," reports news agency IANS.

Kangana was all praises for Alia Bhatt, who plays a spy in Raazi. She added, "I have no words to express performance of Alia (Bhatt) in the film. She is so good." The 31-year-old actress, who is currently filming for her next film Manikarnika: The Queen Of Jhansi told IANS: "Meghna and Alia invited me on the trial of their film but I couldn't attend it because I was busy shooting for my film, then I promised them that I will watch the film soon. I am going to send Alia a congratulatory message for her film."

Promoted
Listen to the latest songs, only on JioSaavn.com
Kangana Ranaut's next film Manikarnika: The Queen Of Jhansi is a period drama, which will also feature Sonu Sood and Ankita Lokhande. Apart from that, she will also be seen in Mental Hai Kya opposite Rajkummar Rao.