Rangoli tweeted about Kangana saying: "Even if entire industry stands against her she will still survive because she is the chosen one." 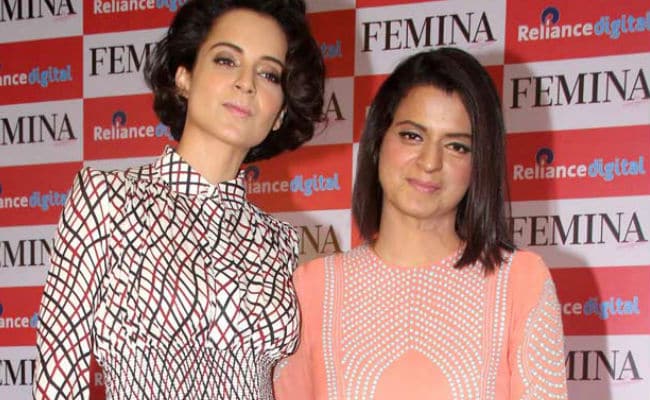 New Delhi: Kangana Ranaut's sister Rangoli Chandel is on full time duty defending the actress on Twitter after Hrithik Roshan issued a statement last week, followed by his friend and colleague Farhan Akhtar writing a Facebook post reminding people that men can also be harassed and stalked. Farhan's post was endorsed publicly by Sonam Kapoor and Karan Johar and Rangoli has lashed out at all these celebrities for speaking up in favour of Hrithik, 43, whom Kangana, 30, claims she dated for seven years. This alleged romance, disputed by Hrithik, is the foundation of an ugly and bitter feud that has played out since the beginning of 2017 and recently escalated after the Roshans filed a police complaint accusing Kangana of stalking.

Rangoli Chandel, who is pregnant and managed her sister until recently, posted a tweets addressed to Farhan and one to Sonam and Karan Johar.

"Dear Farhan Akhtar, your views could've been appreciated if you and your father were not so biased to Roshans," Rangoli tweeted. Farhan Akhtar and Hrithik Roshan, the sons of Javed Akhtar and Rakesh Roshan, have grown up together and co-starred in the hit film Zindagi Na Milegi Dobaara.

Dear @FarOutAkhtar your views could've been appreciated if you and your father were not so biased to Roshans.

"Nice to see how much a gaon wali non-English speaking mountain girl has ruffled so many feathers," Rangoli tweeted to Sonam Kapoor and Karan Johar.

Dear @karanjohar and @sonamakapoor nice to see how much a gaon wali non English speaking mountain girl has ruffled so many feathers....

Kangana Ranaut, seen as an 'outsider' in Bollywood, has found herself increasingly isolated in the industry after taking on Hrithik publicly and sparking a chain reaction of denials when she told Karan Johar on his chat show that he was the 'flag-bearer of nepotism' in Bollywood. Rangoli said in a third tweet that Kangana is 'the chosen one' and will prevail even if the film fraternity in its entirety ranges itself against her.

....Haha even if entire industry stands against her she will still survive because she is the chosen one !!

This last might be a piece of bravado. Both films that Kangana has appeared in this year flopped amid reports that she didn't get along with Rangoon co-star Shahid Kapoor and was unfairly credited with writing Simran. Kangana was accused of exploiting her feud with Hrithik Roshan to promote Simran after telling a TV channel that she wanted the actor and his father Rakesh Roshan to apologise. Hrithik issued his statement last week, Farhan shared his post over the weekend. Both have called out the media for having appeared to take Kangana's story 'at face value.'

Farhan Akhtar, who named neither Hrithik nor Kangana in his post, urged everyone to remember that if the genders had been swapped and it had been a man sending allegedly unwanted mails to a woman, the offender would not have been given the benefit of doubt - as Kangana, who allegedly sent Hrithik over 1,000 (possibly 3,000) unrequited mails, seems to have been given. Farhan also disputed Kangana's claim of a seven-year romance and questioned the picture of Hrithik and Kangana at a party that went viral last year. His primary argument is that nobody should 'discriminate' and 'vilify' Hrithik Roshan based on his gender.


It found favour with Sonam Kapoor and Karan Johar:

Hrithik's statement also included a plea to not jump to conclusions without sifting through evidence and said that he never met Kangana, his co-star from Kites and Krrish 3, privately. Hrithik explained that he is speaking out now because "families suffer, children suffer."


Rangoli, who is closely following media coverage about the case, also tweeted about Hrithik's television interview. Over the weekend she accused Hrithik of leaking Kangana's nude pictures. Here are some of Rangoli's tweets:

In the name of dignity Hrithik released a sly ambiguous blog but simultaneously outraged a young girl's modesty by releasing her pictures.

Hrithik said he is doing everything in Kangana's matter for his children....

....so my humble question to Mr Hrithik Roshan is what is he doing for his children by leaking young girl's nude pictures?

Promoted
Listen to the latest songs, only on JioSaavn.com
In earlier tweets, Rangoli called Hrithik a 'stalker uncle.'

Kangana Ranaut's comment about a 'silly ex,' made last year in an interview, prompted a legal notice from Hrithik Roshan to which she responded with one of her own. She also accused him of 'slut-shaming' her by releasing private pictures and videos. Hrithik claims an 'imposter' was exchanging emails with the actress; Kangana has alleged that Hrithik hacked her mail. Her alleged correspondence to him was accessed by the media from the police complaint filed by the Roshans and went viral last week.