Kangana Ranaut Argues With Journo At Judgementall Hai Kya Event, Accuses Him Of 'Smear Campaign'; Rangoli Chandel Backs Her Up With Tweets

On Monday morning, Rangoli Chandel tweeted screenshots of Justin Rao's social media posts, in one of which he wrote "Manikarnikahaha." 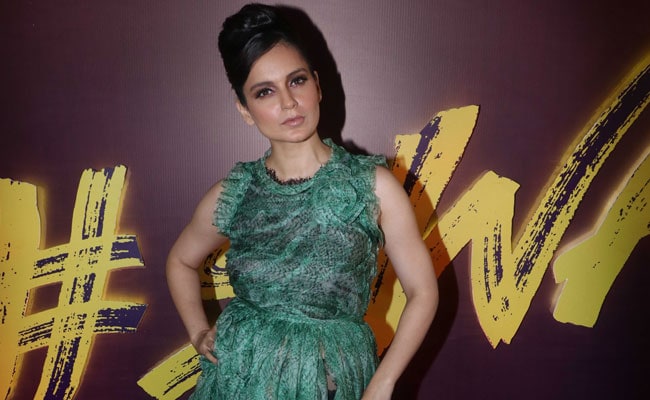 Kangana Ranaut at a Judgementall Hai Kya event in Mumbai

Actress Kangana Ranaut got into a heated argument with journalist Justin Rao at an event for her upcoming film Judgementall Hai Kya on Sunday and accused him of "running a smear campaign" and "harming" her "brand". Viral videos of Kangana's war of words with the reporter have taken over the Internet; news agency ANI has also tweeted an inside video from the event. The video shows Kangana Ranaut asking Mr Rao: "How can you write such bad things?" The reporter protested: "Kangana, I don't think it's fair to say that." Prodded by the journalist about what exactly Ms Ranaut's grief was, the 32-year-old actress said: "You are bashing my film Manikarnika... You are calling me a 'jingoistic' woman making a film on nationalism. Is it my mistake to make a film on nationalism?"

In his defence, Mr Rao denied writing negative reviews and tweeting anything about Manikarnika and added that as a star, Kangana Ranaut "cannot intimidate a journalist." Ms Ranaut responded: "I didn't mean to intimidate anyone. I am just being candid."

Kangana Ranaut also alleged that her words are friendly advice to an acquaintance, claiming Mr Rao has been a "friend" since he interviewed her for three hours in her van once, which he promptly denied. Mr Rao said the alleged interview lasted for merely half an hour and was not even conducted by him. He then went off mic to reiterate "you cannot intimidate a journalist."

Judgementall Hai Kya producer Ekta Kapoor intervened when the on-stage altercation threatened to hijack the event. "I'm sorry, give us some time please," she told Justin Rao. As Mr Rao was requested to move away from the podium, Kangana Ranaut declared: "I don't want to answer any of your questions. You kept doing a smear campaign against me."

On Monday morning, Kangana Ranaut's sister Rangoli Chandel, who also doubles up as the actress' manager, challenged the journalist's claim that he had not disparaged Manikarnika. Ms Chandel tweeted screenshots of Justin Rao's social media posts, in one of which he called the film "Manikarnikahaha." In another, Justin Rao wrote about interviewing Kangana for Manikarnika.

(Contd)....its a shame that @JustinJRao used to pretend to be her friend but when she spoke against cow slaughter and made nationalist film he did major smear campaign against her.

Kangana Ranaut has repeatedly displayed a thin skin when it comes to her film performances. A couple of years ago, she tangled with actress Deepika Padukone who, Ms Ranaut claimed, had not congratulated her in person on the success of her 2014 film Queen. Last week, Rangoli Chandel singled out actors Varun Dhawan and Taapsee Pannu for failing to name her sister in tweets praising the trailer of Judgmentall Hai Kya? Rangoli Chandel has in previous tweets taken umbrage to criticism of Manikarnika, a film that not starred Kangana Ranaut as Rani Laxmibai of Jhansi but was also partly directed by her.

Kangana Ranaut's Mental Hai Kya releases on July 26. Earlier, it was supposed to clash with Hrithik Roshan's Super 30 but the actor rescheduled his film to July 12.