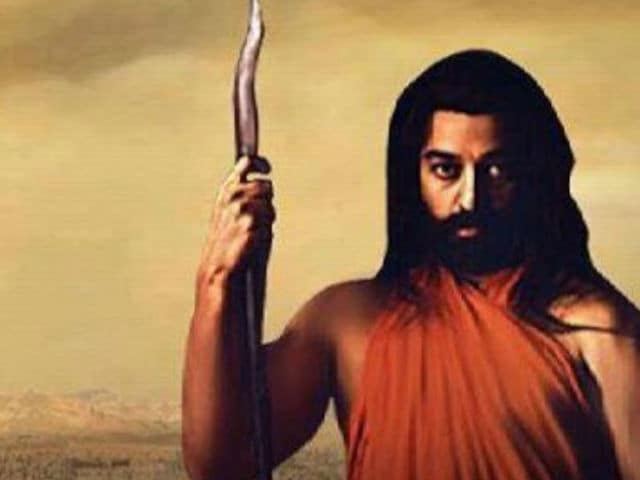 Chennai: Ayngaran International posted a digitally reworked poster of Kamal Haasan's long-pending dream project Marudhanayagam on their official Twitter handle on December 13, which lead to speculations that the film would be jointly revived by Ayngaran and Lyca Productions.

With the prospect that Mr Haasan's ambitious film may finally become a reality, we revisit a few mind-boggling facts about the mammoth project.

1. In the mid-nineties, Kamal Haasan seriously contemplated working on a spectacular historic film, similar to Ben Hur or Brave Heart, but more ambitious and one which reflected the often-ignored aspects of our rich history. For several months he toyed with the idea of attempting a full-length musical historical - something on the lines of the 1937 blockbuster Ambikapathy starring Bhagavathar - with only verses as dialogues. This idea was shelved quoting commercial reasons.2. It was late writer and novelist Sujatha who then suggested Mr Haasan to browse through a folk ballad edited by an eminent Tamil scholar, Vanamamalai, which introduced him to a legendary 18th century Tamil warrior named Maruthanayagam Pillai, who rose from humble beginnings and went on to become the much feared Muhammed Yusuf Khan. He was so intrigued with the life of the historic figure that he believed that Maruthanayagam's story, if narrated well, had all the potential to become a never-before-attempted film in Indian cinema.

3. Mr Haasan then collaborated with Sujatha to work on the screenplay of the project. Interestingly, a computer was used for screenwriting for the first time in India in 1998, making use of software called Movie Magic ScreenWriter. Sujatha was also to be credited as the script doctor, another first for an Indian movie.

4. Many international personalities like French novelist, screenwriter and Academy Award honoree, Jean-Claude Carriere, were involved in the development of Marudhanayagam's screenplay. It is said they repeatedly exchanged drafts for several months. Subbiah Muthiah, an Indian historian known for his writings on the political and cultural history of Tamil Nadu, was also commissioned to render his inputs to the script. In addition, poets like Gnanakoothan and Puviarasu were also involved in the screenplay development.

5. In an interview, writer Sujatha mentioned that Marudhanayagam would be a 20:80 fictionalized biography, with eighty per cent of the film being a faithful adaptation of Samuel Charles Hill's Yusuf Khan : The Rebel Commandant. He also added that logical fiction would be used to fill in grey areas of his life, where no solid or substantial background detail was available such as his conversion to Islam.

6. Mr Haasan managed to rope in Queen Elizabeth II, who usually stayed away from social events, to appear as the chief guest at the launch of the prestigious project which happened at the MGR Film City, Chennai on 16 October 1997.

7. During the 20 minutes that the Queen spent on the sets, a teaser (a pilot film which was shot much before principle cinematography began) was screened, another first for Indian cinema. The short video, which featured a shot battle sequence, was reportedly made on a budget of 1.5 crores (equivalent to 9 crores in 2015), achieving the grandeur and finesse of a product like Baahubali: The Beginning, almost two decades earlier. The music for the short video was composed by Karthik Raja, son of the film's composer Ilaiyaraaja. Here is the video:

8. Karunanidhi, the then chief minister of Tamil Nadu, while speaking about Mr Haasan's brilliance in the event, alluded to the controversial British connection - Marudhanayagam was allegedly hanged by English overlords. Interestingly, it was on the same day, that Veera Pandya Kattabomman - a more prominent Tamil freedom fighter and one of Sivaji Ganesan's legendary roles in celluloid - was hanged to death, though in different time frames.

9. In an irony of sorts, the Queen of England had visited a foreign land to launch a film that visibly attempted to denounce the British. When a controversy stirred in England after the visit, the Queen remained silent.

10. Reportedly, the film was planned on a budget of 85 crores (equivalent to Rs 500 crores in 2015), which would have been the then most expensive Indian film production ever. To get a picture, a film made at 10 crores was a mega-budget movie in those times.

11. Sathyaraj replaced Om Puri in the film as the latter had to pull out in mid-1998 citing prior commitments.

12. When the financial viability of the project came under the scanner, Mr Haasan approached his friends Amitabh Bachchan and Rajinikanth to play significant guest roles. Their response is still unknown.

13. According to reliable sources, Kate Winslet was offered the lead female role of Marsha, but the actress was apprehensive of acting in a foreign language. Mr Haasan subsequently signed a French newcomer for the role.

14. Actor Pasupathi, a then-newcomer, who was set to make his debut in the role of an antagonist, had shot for five days for the film.

15. Michael Westmore, a popular make-up artist from Hollywood, best known for his work in various Star Trek productions, was signed as the chief make-up artist for a record remuneration. He and his apprentice Barry Cooper trained hundreds of Indian make-up artistes for the period look during the film's long drawn out pre-production.

16. In an interesting decision, the much junior Ravi K Chandran, who impressed with Minsaara Kanavu in 1997, was signed ahead of Santosh Sivan and PC Sreeram as the cinematographer for the film. It is said that Sabu Cyril, who was appointed head of art direction, had come up with hundreds of period designs, which have all been documented in volumes.

17. Mr Haasan announced that the film's musical score would be a collaborative effort between Ilaiyaraaja and the legendary English composer, Andrew Lloyd Webber. Carnatic singer, S Subbalakshmi was also signed to sing for a crucial segment in the film.

18. For the test shoot in Jaipur that happened in early 1998, costume designer Sarika had arranged for a little over 7,000 costumes and accessories to be at the crew's disposal.

20. After three months of shooting, the work was suddenly ceased after a British company that had planned to co-produce the film backed out, causing the film to be indefinitely postponed.

21. Mr Haasan had since then tried on numerous occasions to revive the project, with little success.

We sincerely hope Kamal Haasan redefines Indian cinema yet another time with this prestigious project.