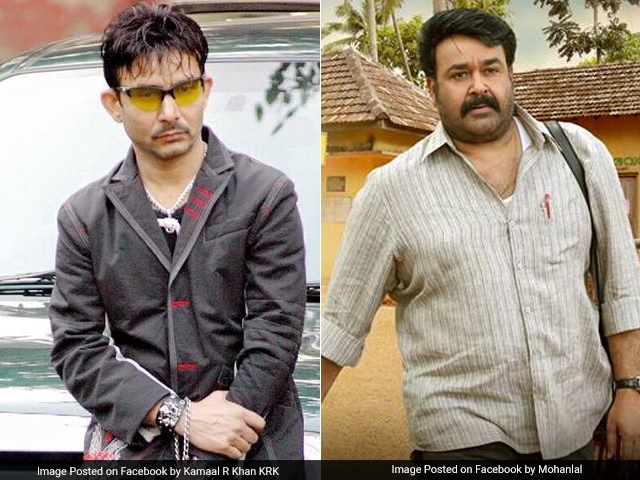 New Delhi: Kamaal R Khan, self-proclaimed actor, producer and movie critic, has addressed Mohanlal yet-again on Twitter but this time to apologise to the superstar for referring to him as "chhota bheem" previously. KRK also offered an explanation along with his apology, saying that he was unaware of Mohanlal's status as a 'superstar of Malayalam films.' "Sir Mohanlal, sorry to call you 'Chhota Bheem' because I didn't know much about you but now I know that you are a superstar of Malayalam films," KRK tweeted on Sunday. Last week, KRK started tweeting about Mohanlal after it was announced that he is to play the central role of Bheem in the Rs 1000-crore Mahabharata. Kamaal R Khan had opted for a comparison of himself with Mohanlal and called the "bigger star."

Sir @Mohanlal sorry to call you #ChotaBheem Coz I didn't know much about you. But now I know that you are a super star of Malayalam films.

However, Mohanlal continues to maintain silence on the matter. In a series of offensive tweets last week, KRK referred to the 56-year-old actor as "chhota bheem" and "joker", and said he was unsuitable to play Bheem in the ambitious Mahabharata film. "People please see this chhota Bheem. It will be a biggest insult of Bheem if this joker plays role of greatest Bheem," KRK had tweeted.

KRK was subsequently trolled by fans of Mohanlal, who said, they had not even heard of KRK ahead of his tweets about the superstar. KRK in turn asked Mohanlal to keep his fans in control, tweeting: "Why are your fans abusing me since morning? It's not fair, sir."

This is what KRK had tweeted:

Sir @Mohanlal you look like Chota Bheem so then how will u play role of Bheem in Mahabharata? Why do you want to waste money of B R shetty?

Can't understand why Malayali ppl r abusing me since morning? M I wrong abut Mohanlal who is not equal 2Hathiyar of Bheem n wants 2play him?

So if I called you Chota Bheem what you are really, then why are ur fans abusing me since morning? It's not fair sir https://t.co/Q4OEFo2mqI

U idiot fans of @Mohanlal Aka Laalten Aka Chota Bheem, he has 1.7million follower n I have 3.7million. Calculate to know who is bigger star.

Promoted
Listen to the latest songs, only on JioSaavn.com
This is not the first time Kamaal R Khan has been called out on Twitter as actresses Sonakshi Sinha, Parineeti Chopra and Lisa Haydon have also dealt with him sterny for offensive tweets against them.

Meanwhile, the massive Mahabharata film will be financed by UAE-based businessman B R Shetty and will release in two parts like Baahubali. The film will be based on MT Vasudevan Nair's renowned novel Randaamoozham. In a video message on Facebook, Mohanlal said: "It is a privilege that I am playing the role of Bheem. I want to thank them for his faith in me." It will be released in six languages some time in 2020 and be dubbed in more. The first part of the film will go on floors in 2018.

Baahubali: The Conclusion To Premiere Worldwide Ahead Of Release