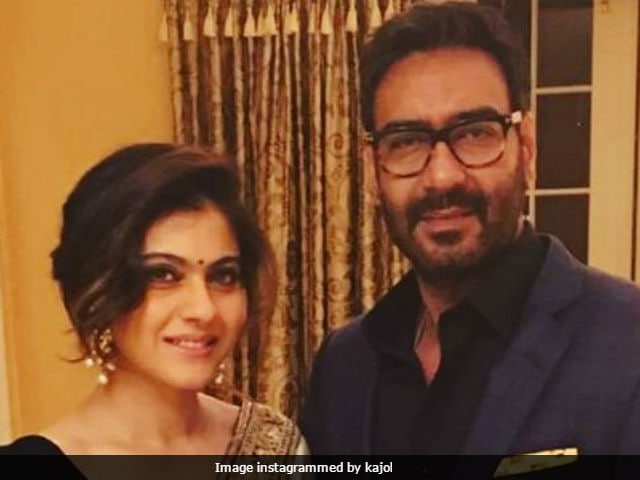 New Delhi: Kajol shared a heart-warming picture with husband Ajay Devgn on the occasion of their 18th anniversary. The 42-year-old actress got married to the Golmaal actor on February 24, 1999. The wedding was a private affair which was attended by their families and close friends from the film industry. The actress posted the adorable picture on Instagram, captioned: "Thank y'all for all ur wonderfully warm wishes." The couple has two children together- Nysa and Yug. The Kuch Kuch Hota Hai actress strongly supported Ajay Devgn when his movie Shivaay had clashed with her former friend Karan Johar's Ae Dil Hai Mushkil.

Thank y'all for all ur wonderfully warm wishes.

Promoted
Listen to the latest songs, only on JioSaavn.com
Kajol Devgn was last seen in 2015 movie Dilwale, directed by Rohit Shetty. The film also featured Shah Rukh Khan, Varun Dhawan, and Kriti Sanon in lead roles. The Dilwale Dulhania Le Jayenge is currently working with Soundarya Rajinikanth on his next venture Velaiilla Pattadhari 2co-starring Dhanush and Amala Paul. The movie is a sequel to Velaiilla Pattadhari(2014) and also marks Kajol's comeback to the Tamil film industry after a gap of 20 years.

Meanwhile, Ajay Devgn was last seen in his home production Shivaay. The 47-year-old actor will next be seen in Baadshaho. The film is written by Rajat Arora, directed and co-produced by Milan Luthria. Emraan Hashmi, Esha Gupta, Ileana D'Cruz and Vidyut Jammwal also feature in lead roles. He would also be collaborating with Rohit Shetty for Golmaal 4 in which he will reprise his role. The film is the fourth instalment of the Golmaal series. The previous ones were- Golmaal: Fun Unlimited (2006), Golmaal Returns (2008) and Golmaal 3 (2010).