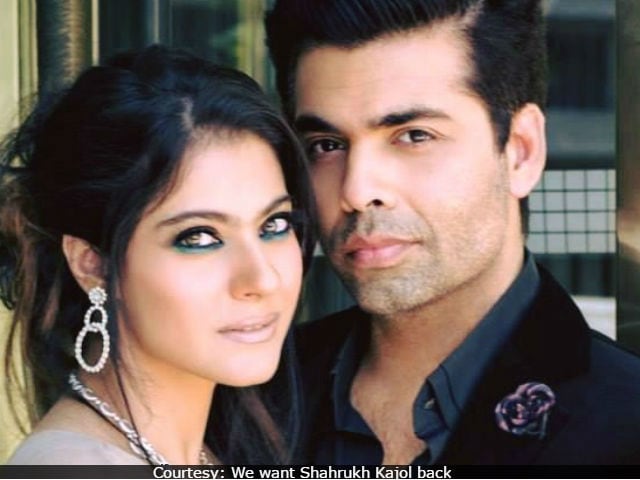 Kajol and Karan Johar had been friends for 25 years (Courtesy: We-want-Shahrukh-Kajol-back)

New Delhi: Filmmaker Karan Johar has written at length about the end of his 25-year friendship with Kajol but for now, the actress is choosing to hold her peace. Kajol, 42, told DNA that silence is the 'best thing to do right now' and that if she later opts to speak out, she'll make sure the world listens. "I think that the best thing for me to do right now, as far as this entire topic is concerned, is to stay silent. And that's exactly what I'm going to do. When and if I choose to give my opinion on this particular topic, I will make sure the world hears of it," said Kajol to DNA.

She's certainly sticking to her word - Deccan Chronicle reports that she dodged a question on whether or not she would visit her former friend's newborn twins.

The rift between Kajol and Karan Johar came to an ugly conclusion last year, after a clash at the box office between Karan's film Ae Dil Hai Mushkil and Shivaay, made by and starring Kajol's husband Ajay Devgn. In a plot twist to rival Bollywood's best, Ajay posted what he believed was audio evidence that Karan Johar had paid self-styled critic Kamaal R Khan to tweet favourably about his film. This was later proved wrong.

In his autobiography An Unsuitable Boy, Karan blamed Ajay Devgn for the friction between him and Kajol, whom he directed in his films Kuch Hota Hai, Kabhi Khushi Kabhie Gham, and My Name Is Khan. "She's killed every bit of emotion I had for her for 25 years. I don't think she deserves me. I feel nothing for her anymore," he wrote, adding that "she can never come back into my life."

Kajol, who posted a tweet in support of her husband after he publicly accused Karan Johar of buying tweets, suggested to DNA that her ex-friend wrote what he did simply to sell his book. "Well, I think there's a lot of fake honesty going around as well. I really do. There are a lot of people going around and saying, 'You know I'm being honest' and actually, it's just for selling books, or movies and ratings. I don't know, there are a lot of reasons for faking in front of the camera. Or in front of the public, for that matter. I think honesty has been abused over time and space," Kajol told DNA.

Promoted
Listen to the latest songs, only on JioSaavn.com
Karan Johar recently brought his twins - Roohi and Yash, born via surrogacy - home and has been entertaining a steady stream of celeb visitors since. Safe to say Kajol won't be spotted among them.

Kajol was last seen in Dilwale, opposite Shah Rukh Khan. She is currently prepping for her Tamil film VIP 2, opposite Dhanush. Meanwhile, Karan Johar's Dharma Productions is in charge of the Hindi release of S S Rajamouli's Baahubali: The Conclusion. The film hits the theatres on April 28.