Kader Khan's Son On Govinda's 'Father Figure' Comment: 'Has He Even Bothered To Call Us Once?'

Sarfaraz said: "I can assure his fans all over the world that we won't let the film industry forget him" 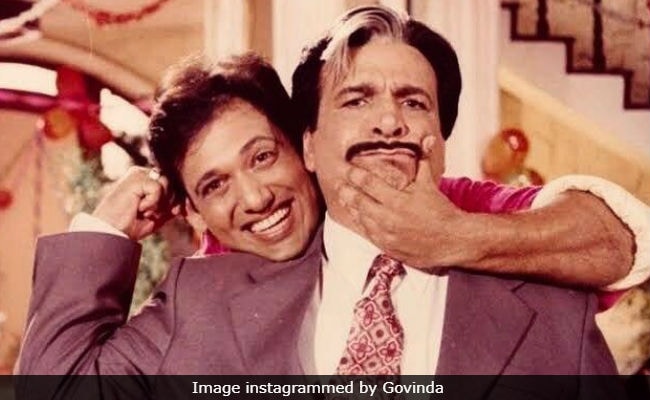 Govinda with Kader Khan in a still from Dulhe Raja. (Image courtesy: Instagram)

Kader Khan's son Sarfaraz, who has featured in films like Tere Naam, Wanted and Once Upon a Time in Mumbaai Dobara, says that the Hindi film industry has too many "fragmented camps and loyalties" and it has an "out-of-sight-out-of-mind mentality (which) can't be helped," reports news agency IANS. On Instagram, Govinda paying a tribute to Kader Khan, wrote the late actor was like a "father figure" to him. But Sarfaraz had a different story to tell. He told IANS: "Please ask Govinda how many times he inquired about his 'father figure's' health. Has he even bothered to call us even once after my father's passing away? This is the way our film industry has become. There are no real feelings for those who have contributed to Indian cinema when they're no longer active."

Govinda and Kader Khan co-starred in several film including Haseena Maan Jayegi, Hero No 1, Raja Babu, Sajan Chale Sasural and Coolie No 1 among others.

RIP Kader Khan Saab. . He was not just my "ustaad" but a father figure to me, his midas touch and his aura made every actor he worked with a superstar. The entire film industry and my family deeply mourns this loss and we cannot express the sorrow in words. I pray to God that may his soul rest in peace. . . #ripkaderkhansaab

However, Sarfaraz also said that among his colleagues, Kader Khan remembered Amitabh Bachchan fondly in his final days. "There are so many people in the film industry whom my father was close to. But the one person that my father loved the most was Bachchan saab (Amitabh Bachchan). I'd ask my father whom he missed the most from the film industry and the answer promptly would be Bachchan saab. And I know the love was mutual. I want him to know that my father spoke about him till the end," Sarfaraz told IANS.

Kader Khan had written several blockbuster dialogues for Amitabh Bachchan in the Seventies and the Eighties in films made by Manmohan Desai and Prakash Mehra. Coolie, Amar Akbar Anthony and Agneepath are a few examples. In a recent interview with IANS, David Dhawan had said: "As a writer, he made every hero sound credible and spectacular. Just look at Bhaijaan's (Kader Khan) contribution to Amit ji (Amitabh Bachchan's) on-screen persona."

Sarfaraz Khan told IANS that Kader Khan died surrounded by his family members and he had a 'smile on his face" as he died. "There was a smile on my father's face when he passed away. I cherish that smile more than anything else in the world. My father's final years were very painful for him. He suffered from a degenerative disease that left him completely without the will to do anything. He got the best possible medical care here in Toronto."

"My father has contributed so much to Hindi cinema. We intend to honour his memory in a substantial and relevant way. At the moment we're all mourning his going. But I can assure his fans all over the world that we won't let the film industry forget him," he added.

Kader Khan's funeral was held in Canada today. He was buried in a cemetery in Toronto.