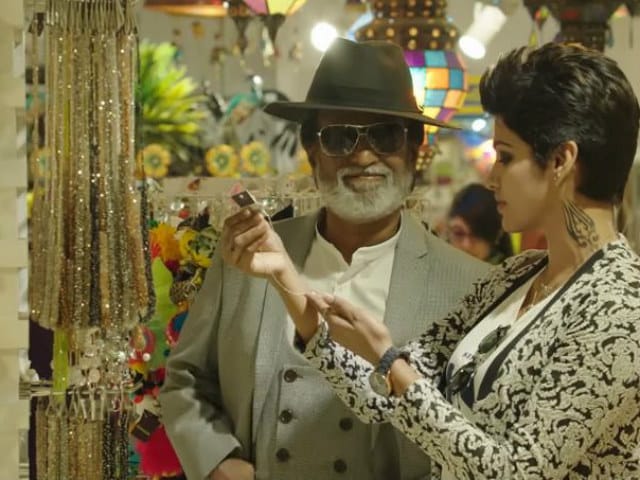 Kabali deleted scenes: Rajinikanth and Dhansika in a still from the video

New Delhi: One can never have enough of Rajinikanth. The megastar's blockbuster Kabali has well-bombarded the box office since it released worldwide on July 22. And just to ensure a brilliant start to 2017 for the fans of Thalaivar, Team Kabali released a playlist of the deleted scenes from the movie. Directed by Pa Ranjith, Kabali stars Rajinikanth as Malaysia-based don Kabaleeswaran or Kabali. Actress Radhika Apte features as Kabali's wife - Kumudhavalli and appears in one of the video clips posted on YouTube. The action drama is produced by Kalaipuli S Thanu, who tweeted the collection of deleted scenes on Saturday morning. In July, the first shows in Chennai and Mumbai ran at 6 am and tickets were reportedly sold in black at Rs 5,000.

Apart from scenes with Kumudhavalli, the discarded clips also offer glimpses of Dhansika, who features as a hired assassin Yogi and actor Dinesh as criminal Jeeva.

Grab you bowl of popcorn, take your place on the couch, for this is going to be a very Kabali experience:


Rajinikanth Gets a Gun from Don:


Kabali expresses his love for Kumuthavalli:


Rajinikanth tracked the fanfare and Kabali craze all the way from USA, where he was with daughter Aishwaryaa. Within days after Kabali hit screens, he returned to India and thanked fans in a letter, which he signed off writing "magizhchi," a Tamil word which translates into "Happy and thanks" in English.

Radhika Apte was busy with an award show when Kabali released and missed out experiencing the Kabali craze first-hand. However, Radhika told NDTV in July that all it took to cheer her up was a call from Rajinikanth. "He called me to congratulate me. Can you imagine such a huge superstar doing that? He said, 'congratulations, the film is doing well.' He's just so nice," she told NDTV. She also shared her experience of working with the 66-year-old superstar and told PTI: "There is no bigger star than him Rajinikanth). It is because he is so humble, simple. He is so sincere and hard working. It is incredible to observe his hard work and I have had a great time working with Rajini sir."

Promoted
Listen to the latest songs, only on JioSaavn.com
In July, the ground for Kabali was prepared with huge PR strategies. Team Kabali had a special Air Asia plane flying fans from Bengluru to Chennai to watch the film on opening day. There were other high-profile partnerships with brands like Airtel.

Have a very Kabali weekend, folks!