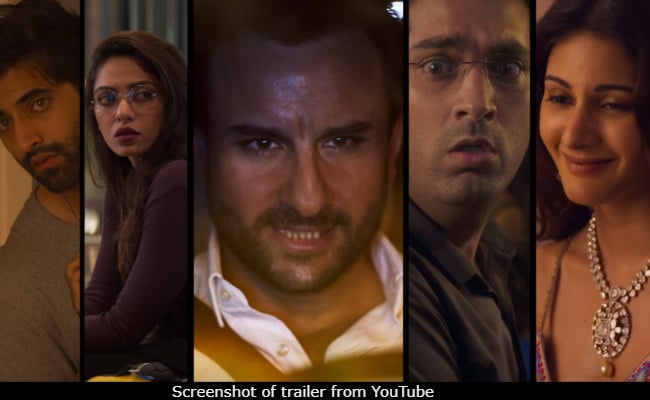 New Delhi: The trailer of Saif Ali Khan's Kaalakaandi will indeed remind you of movies like The Hangover, Delhi Belly and some more like them. Apart from being rather trippy, the trailer also smells super duper fun, partly because Akshat Verma, who is the screenwriter of the very popular Delhi Belly, writes and directs this too. The trailer of Kaalakaandi begins with the protagonist's (Saif Ali Khan) doctor telling him that he's been diagnosed with stomach cancer. Saif's rather taken aback because, like his character says in the trailer, he's never smoked cigarettes, has stayed away from alcohol and never even spelled 'drugs'.

The doctor's expression reveals that Saif's character does not have much time in hand and he should make the most of the remaining days. Instead of medicines, he's prescribed a license to indulge in everything he's abstained from so far. Then begins a crazy journey of rave parties, rash driving, drunk diaries and what not.

Now we know why the very conservative Censor Board had reservations with the movie. Kaalakaandi was reportedly suggested 70 cuts earlier this year after which the film was taken to Film Certification Appellate Tribunal for certification by the makers.

The cast of Kaalakaandi also includes names like Deepak Dobriyal, Vijay Raaz, Kunaal Roy Kapur, Sobhita Dhulipala, Amyra Dastur and Akshay Oberoi, all of who have substantial screen time in the trailer. In the trailer, every now and then, Saif's character stumbles upon one of their characters, only to find they are also involved in current happenings of his life.