Kaalakaandi Preview: All Set To Get High On Saif Ali Khan's Film?

Kaalakaandi: Saif Ali Khan is all set to meet you at the theatres tomorrow 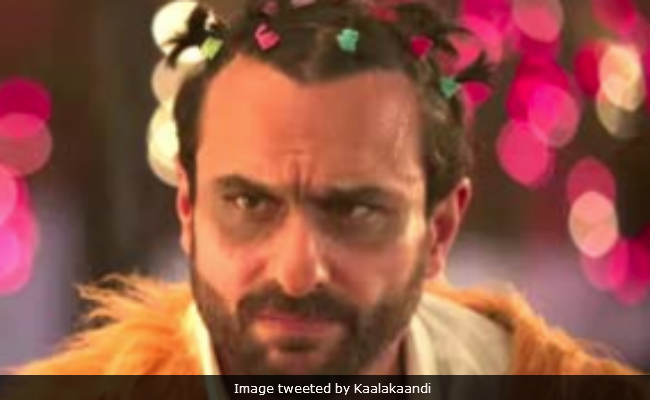 New Delhi: The wait for Saif Ali Khan's Kaalakaandi is finally over. The Akshat Verma- directed film hits the screens tomorrow and it seems the Internet can't keep calm as Saif's film is already trending. Kaalakaandi will indeed remind you of movies like The Hangover, Delhi Belly and some more like them. Apart from being rather trippy, the film also smells super-duper fun, partly because Akshat Verma, who is the screenwriter of the very popular Delhi Belly, writes and directs this too. The film revolves around the life of the protagonist (Saif Ali Khan) who has been diagnosed with stomach cancer. Saif's character does not have much time in hand and he realises that he should make the most of the remaining days. Stars have already loved Kaalakaandi's trailer and so do we. Here are a few reasons why we can't keep calm about Kaalakaandi, which releases tomorrow:

Saif Ali Khan's last two outings - Rangoon and Chef - might not have performed well at the box office, but Saif's performance in both the films was appreciated. With Kaalakaandi too, Saif's fans have high hopes. In a recent interview to news agency IANS, Saif said that the audiences still consider him a "bankable actor" as he believes in pushing the envelope. Saif said, apart from the fact that a star can bring money and security to a project, as an actor it is also important to understand the vision of the filmmaker.

Kaalakaandi is Akshat Verma's first film as a director. He earlier wrote the script of Imran Khan's Delhi Belly, which was produced by Imran's uncle actor Aamir Khan. Kaalakaandi's trailer already started the debate of it being similar to Delhi Belly.

Kaalakaandi songs have become the Internet's favourite and are already on the top of our party songs' list. The redux of Punjabi song Kaala Doreya and Swagpur Ka Chaudhary are super hit.

We are all set for Kaalakaandi. Are you?