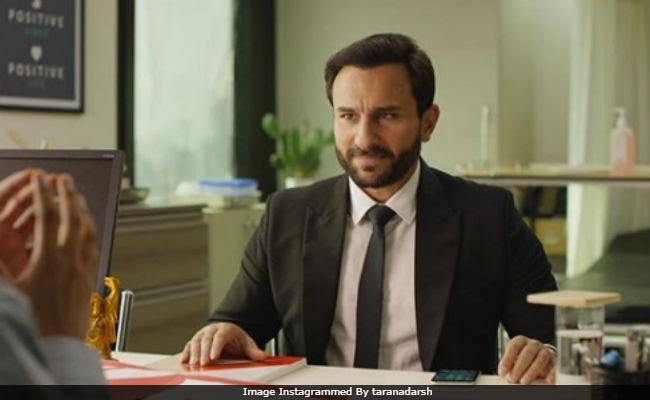 New Delhi: Saif Ali Khan's Friday release, Kaalakaandi, is a 'huge disaster,' Box Office India reports. The film's overall collection, after three days, stands at Rs 3.85 crore. Trade analyst Taran Adarsh tweeted the box office report of Saif's Kaalakaandi and revealed that on Sunday, the film earned Rs 1.40 crore, a little more than what it made on Saturday. Kaalakaandi's weekend business amounts to Rs 2.60 crore and on Day 1 (Friday), it made Rs 1.25 crore. "Despite being a metroplex film, it had its best collections on the first day. But the first day collection was itself a disaster," the report in Box Office India stated.

Kaalakaandi tracks the story of a man (played by Saif) who is diagnosed with cancer and how he utilises his remaining days.

In his review for NDTV, film critic Saibal Chatterjee gave the film 3 stars out of 5 and wrote, "The multiple tales unfold in parallel arcs. It is only in the penultimate scenes and a zany final shot that the plot connects a few of the characters but only in a tenuous manner. Kaalakaandi takes a while to warm up but when it does it sets a lively pace, especially in the second half. Kaalakaandi may not be for all palates, but the film has enough spice for those in the mood for an off-the-beaten-track Bollywood experience."

Promoted
Listen to the latest songs, only on JioSaavn.com
Kaalakaandi released with Anurag Kashyap's Mukkabaaz and Vikram Bhatt's 1921.