Kaagaz Review: Satish Kaushik's labour of love drives home the plight of a common man up against an administrative system that thrives on running the already dispossessed further into the ground. 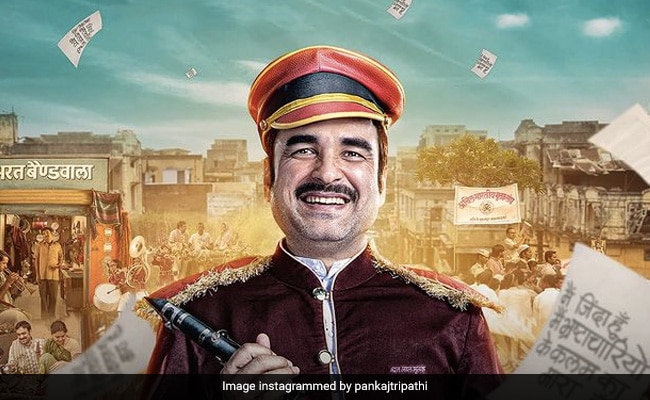 Kaagaz Review: A still from the film. (courtesy pankajtripathi )

Both Pankaj Tripathi and the dead-on-paper rural wedding bandmaster that he plays in Kaagaz face an uphill task. The lead actor has to carry the weight of the entire film on his shoulders. He does so gamely, occasionally allowing his usual understated style to make way for a more demonstrative mode of acting. He pulls off the back-and-forth movement between the two poles without letting the strain show.

The problems that hobble Uttar Pradesh villager Bharat Lal, modelled on the real-life Lal Bihari Mritak, a man who had to fight tooth and nail for nearly two decades to prove that he is alive, aren't as easily resolved. The antagonist in Kaagaz is a mere entry in a government register that has sealed the protagonist's fate.

Bharat Lal - somebody refers to him as Bharat ke Lal - is declared dead in government records as a consequence of machinations of a branch of his family that stands to gain if he ceases to exist on paper. The man is driven over the edge in trying to reverse an entry in a file in the registrar's office. He realizes that the 'fact' of his 'death' is cast in stone.

Actor-director-producer Satish Kaushik's long-in-gestation labour of love uses Bharat Lal's strange predicament as a means to drive home the plight of a common man up against a sloppy and slothful administrative system that thrives on running the already dispossessed further into the ground. Underdogs are easy meat. Kaagaz tells the story of one such unfortunate soul who decides to fight back. The film conveys the man's despair and tenacity forcefully enough to pass muster.

The film, which is out on Zee5 Premium and in select UP theatres, opens and ends with Salman Khan (whose banner SKF is a co-producer) reciting a poem titled Kaagaz. It emphasizes the centrality of pieces of paper in the lives of people. The lyrical suggestion takes on an ominous overtone when seen in the context of the quandary of those who are condemned to a ceaseless struggle for survival.

Bharat Lal's story spans from 1977 (the year the Emergency ended) to the post-liberalization 1990s (the opening up of the economy isn't referenced, though). So, is Kaagaz only about a specific period in the history of contemporary India or is it trying to tell us more about the plight of the powerless? It obviously is.

The film bemoans a political system in which citizens are reduced to mere numbers to be counted at election time. Aren't they all as good as dead? That is precisely what Kaagaz suggests - and what Bharat Lal echoes when he decides to try and mobilize other "officially dead" people like him from across the country and trigger a movement to reclaim their right to be counted among the living.

The story per se serves a specific purpose - it puts Lal Bihari Mritak's individual struggles on the screen - but it does resonate beyond the limited scope of the narrative of a man wronged. The tale has a believe-it-or-not quality all right, but we have seen much worse in more recent times. Do we even need to enumerate where and how?

The director, who also plays Bharat Lal's wily advocate and guide Sadho Ram Kewat, falls back on comic touches in the early portions of the film to convey the sheer absurdity of the situation. When Bharat, who owns a wedding band, learns that the government has pronounced him dead, he becomes a butt of ridicule in his village.

With little sympathy coming his way - his wife Rukmini (M. Monal Gajjar in her first Hindi film) stands by him although after a point the inevitable distractions began to cause domestic strife - he decides to everything on hold. He tries every trick in the book to impress upon the authorities that he is alive and kicking. His moves either boomerang on him or fall flat. But the underdog keeps chipping away.

As the story unfolds, it assumes serious undertones and then veers into full-blown melodrama. It helps that Tripathi possesses the skills to shift gears effortlessly as he goes all out to capture the quixotic nature of the war he wages. He is a harried man fighting a life-and-death battle but one cannot help feeling that he is more a figure tilting at windmills.

Kaagaz employs elements of popular Hindi cinema - including an item number - but the songs strewn across the film aren't lip-synched musical set-pieces that halt the flow of the tale. They are interspersed with dialogues that take the story forward. It is the pitching that is steadfastly emotive, which is at times somewhat at odds with the close-to-the-bones reality of Bharat Lal's sorry fate. The film would probably have been better served had it opted for a less strident tone.

But the director packs Kaagaz with enough force to be able to get the point across. In one scene late in the film, Bharat Lal's lawyer and a young journalist meet the state Chief Minister to apprise him of the situation. The camera placed behind the actor playing the CM reveals only his hand and fingers as he gesticulates blankly. Besides revealing the power that the politicians wield, it also underscores how distant and disinterested those that exercise authority over the destiny of the unwashed millions are from the people they represent.

The bandmaster is out of tune with an insensitive bureaucracy and a political structure that has no patience for the rights of the weak. He stakes his all to reclaim his dignity. The local MLA, Ashrafi Devi (Mita Vashisht), does extend a helping hand, but she has no magic wand that can wish away Bharat Lal's misery.

Pushed to the wall, he takes several false steps in the hope of getting into trouble with the law. He knows that a criminal case against him could serve to prove beyond doubt that he is still very much around in flesh and blood. But like all his other despairing moves, these do not yield the desired result.

Mita Vashisht and Brijendra Kala (as a judge) have fleeting cameos. Satish Kaushik plays a more extended role with customary aplomb. It is however left to Pankaj Tripathi to keep Kaagaz afloat even when it appears to be wilting a touch under the burden of its solemn purpose. He doesn't let the film down.