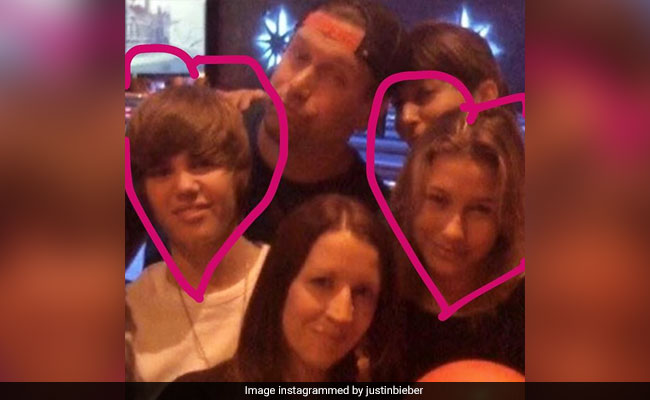 Popstar Justin Bieber shared a really adorable throwback picture of himself and his model wife Hailey Baldwin from their teenage days on his Instagram profile. The couple, who are reportedly getting married on Monday, had a secret wedding last year, which Justin confirmed with a "My wife is awesome" post in November (more on that later). The throwback photo, which also features Hailey Baldwin's parents Stephen and Kennya Baldwin, comes with a catchy caption, all thanks to Justin. In his post, Justin thanked Hailey's parents for "letting her marry a savage" like him. Instagramming the throwback photo, Justin wrote: "Me and the wife! And the in-laws! Thanks for letting your daughter marry a savage like me."

Me and the wife! and the in laws !! Thanks for lettin ur daughter marry a savage like me /a>

Like we mentioned above, Justin Bieber and Hailey Baldwin have known each other since they were teenagers though it wasn't until 2014 that their friendship blossomed into a romance. However, things didn't work out between the couple initially and they parted ways. Justin and Hailey later rekindled their relationship and by last September, the pair secretly got married in New York.

Justin Bieber and Hailey Baldwin are reportedly having the second wedding at the Montage Palmetto Bluff, the US, stated a report in TMZ.

A couple of days ago, Justin shared another throwback picture pf himself and Hailey, in which she could be seen posing with her arm around him. "My wife and I, where it all began," Justin Bieber captioned the picture.

My wife and I :) where it all began

And now, take a look at Justin's aforementioned "My wife is awesome" post:

Justin Bieber is a Canadian singer, who is best known for songs like Baby, Boyfriend, Sorry and Let Me Love You among others. On May 10, he released the song I Don't Care with Ed Sheeran.