These pictures look straight out of a fairytale 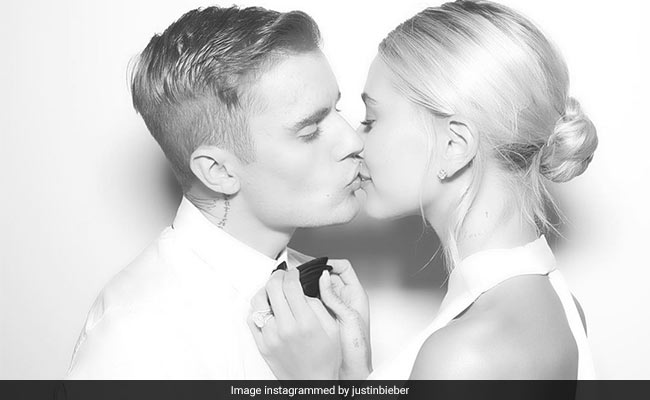 If pics from Justin Bieber and Hailey Baldwin's second wedding ceremony don't melt your hearts, we don't know what will. On Tuesday afternoon, Justin Bieber posted a stunning set of monochrome pictures on his Instagram profile. In one of the pictures, the couple can be seen kissing while in another, they can be seen goofily posing together. Justin wrote, "My bride is..." and added a fire emoji to his post. Justin Bieber's post garnered over 10 lakh likes within a few minutes and we are not surprised at all. The couple, who got secretly got married in September last year, hosted a second wedding ceremony in South Carolina on Monday.

Ahead of their second wedding ceremony, the Baby singer posted a throwback picture from his teenage days along with Hailey Baldwin and her parents Stephen and Kennya Baldwin. He captioned it: "Me and the wife and the in laws. Thanks for letting your daughter marry a savage like me."

Me and the wife! and the in laws !! Thanks for lettin ur daughter marry a savage like me

Justin and Hailey knew each other since they were teenagers. However, it was only in the year 2014 that they began dating. After dating for a while, the couple parted ways but they rekindled their relationship last year in September and got secretly married in New York.

Justin Bieber has sang many hit tracks, which includeBaby, Boyfriend, Sorry and Let Me Love You to name a few. His last song was I Don't Care, which released in May this year. In a career spanning a decade, the Canadian singer has received several awards and accolades including a Grammy Award for Best Dance Recording.

Hailey Baldwin, a renowned model, is the daughter of The Usual Suspects actor Stephen Baldwin and graphic designer Kennya Deodato.