"Love your posts with your daughter," commented a user 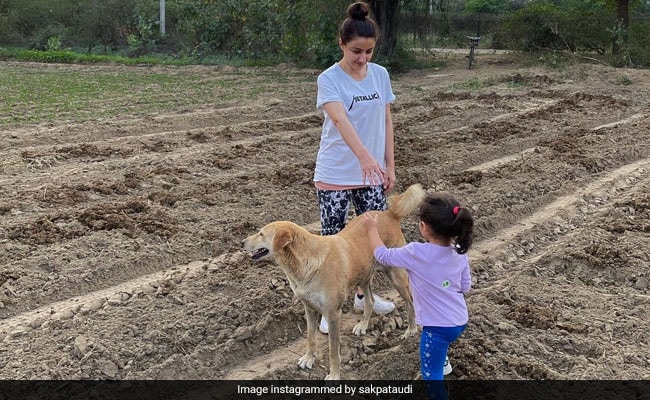 Seen Soha Ali Khan's latest entry on Instagram? It is adorable. The actress posted a photo of herself and her little daughter Inaaya "having a field day" on Tuesday. In the picture, Soha Ali Khan can be seen sporting a white t-shirt and printed trousers while Inaaya looks super cute in a purple t-shirt and blue tights. The little munchkin can be seen playing with a dog on the field. Sharing the picture, Soha Ali Khan wrote: "Having a field day!" Reacting to the actress' post, one of her fans commented: "love your posts with your daughter...how you keep her so grounded and keep her in touch with her roots."

Yesterday, Soha Ali Khan shared pictures of herself and Inaaya exercising together at the Pataudi Palace. "Of suns and daughters...happy women's day," she wrote in the caption. Check out the post here:

We love this video of Inaaya calling a peacock:

Soha Ali Khan and actor Kunal Kemmu got married in 2015 after dating for a few years and they welcomed Inaaya Naumi two years later in September 2017. Soha and Kunal have co-starred in films such as 99 and Dhoondte Reh Jaaoge. He also has a cameo in Soha Ali Khan's Mr Joe B. Carvalho, in which she starred opposite Arshad Warsi.