Jumanji: The Next Level Box Office Collection: The film performed much better than its prequel on the opening day 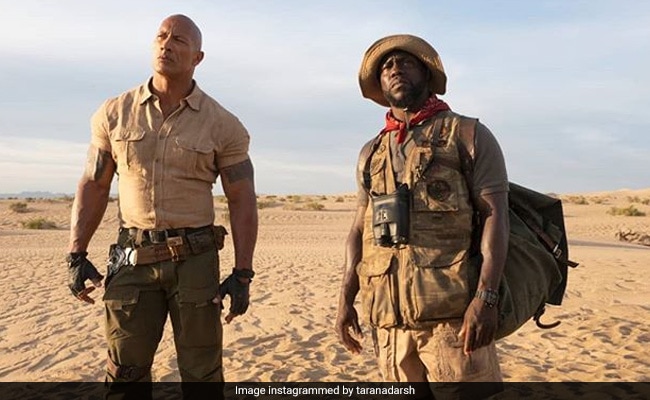 Jumanji: The Next Level Box Office Collection: A still from the film. (Image courtesy: taranadarsh )

On its first day, Dwayne Johnson's new filmJumanji: The Next Level "dominated" the box office with an impressive opening day collection, reported Bollywood trade analyst Taran Adarsh. The Hollywood film is the sequel to the 2017 film Jumanji: Welcome To The Jungle. Sharing the box office report of the film on social media, Taran Adarsh stated that Jumanji: The Next Level performed much better than its prequel on the opening day. He wrote: "#Hollywood dominates yet again... Jumanji: The Next Level embarks on an impressive start... Bigger start than its prequel Jumanji: Welcome To The Jungle... Thu previews 1.15 cr, Fri 5.05 cr. Total: Rs 6.20 cr Nett BOC. #India business. All versions. #JumanjiTheNextLevel."

Other than Dwayne Johnson, the sequel also features Jack Black, Nick Jonas, Kevin Hart, Karen Gillan, Danny DeVito and Awkwafina among others. Dwayne is attached to the film as a producer as well.

Directed by Jake Kasdan, Jumanji: The Next Level opened to decent reviews on Friday. Reviewing the film for NDTV, Saibal Chatterjee gave the film three stars out of five and wrote: "It is all a game and is, for the most part, fun, but one thing that Jumanji: The Next Level isn't is simple. It is like a complex jigsaw puzzle with too many confounding pieces popping up every now and then: it tends to stray from its course at crucial junctures but mercifully does veer too far away not to be able to course correct when matters turn too bewildering."

Jumanji: The Next Level released in India in Hindi, English, Tamil and Telugu.