"Wow! Roohi, What a classic performance we are giving," said Karan Johar 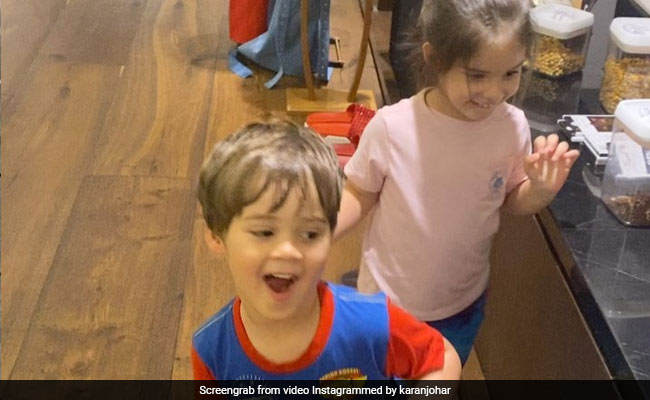 Yash and Roohi in a still from the video. (courtesy karanjohar)

Another day, another post from "Lockdown With The Johars" or should we say "Johar's Got Talent." Well, Karan Johar posted a super cute video of his twins Yash and Roohi dancing, on his Instagram profile and cute can't even begin to describe it. It will be tough to pick what we liked more about the post, Roohi and Yash's dance or Karan Johar's commentary. KJo says in the video: "Wow, what dancers! India's got talent." Later in the video when Roohi changes the track to Choti Si Umar Mein, KJo says, "Wow! Roohi What a classic performance we are giving. I love this versatile performance." Meanwhile, Yash is seen applying lip balm. Karan signs off the video and says, "Okay, that's it from the dancers. Toodles." He captioned the video: "JGT ! Johar's got talent! #lockdownwiththejohars #dancelikenooneiswatching."

Karan Johar welcomed Yash and Roohi via surrogacy in the year 2017. In terms of work, Karan Johar's upcoming ventures as a producer include Sooryavanshi, Dostana 2, and Brahmastra. He directed a segment of Netflix's Ghost Stories and produced Good Newwz, starring Akshay Kumar, Kareena Kapoor, Kiara Advani and Diljit Dosanjh, recently. He will also be directing the period drama Takht, which stars Kareena Kapoor, Ranveer Singh and Janhvi Kapoor among others.