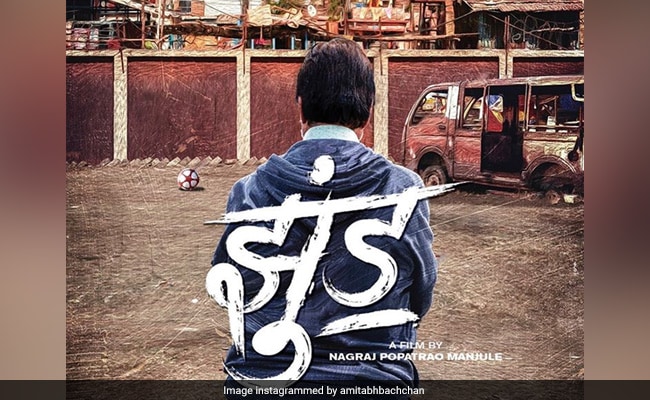 Amitabh Bachchan on a poster of Jhund (courtesy amitabhbachchan)

"First glimpse of Jhund," wrote Amitabh Bachchan while sharing the first poster of his new film Jhund, which is directed by critically acclaimed filmmaker Nagraj Manjule, best known for helming National Award-winning Marathi film Sairat. Jhund marks Nagraj Manjule's debut as a Bollywood film director. In the first poster of Jhund, there's literally just a "glimpse" of Amitabh Bachchan, who can be seen in a blue hoodie. The poster has Big B facing his back to the camera as she stares into what appears to be an abandoned, fenced area with only two things featuring prominently - a red and white football and a dilapidated car.

Jhund will be jointly produced by Krishan Kumar, Raaj Hiremath, Savita Raj Hiremath, Nagraj Manjule and Bhushan Kumar, who announced the film in February with this photo: "Amitabh Bachchan leads this Jhund," he wrote. Big B will reportedly play the role of a professor in Jhund.

Speaking to news agency IANs earlier, producer Savita Hiremath revealed that she personally flew to meet Nagraj Majule about the movie and in the course of their conversation discovered that the filmmaker is a huge fan of Amitabh Bachchan. When she told Nagraj Majule that Mr Bachchan can be approached for Jhund, the director agreed immediately to helm the film. Amitabh Bachchan had watched Sairat and asked for the scrip before signing the dotted line, reported IANS.

On the work front, Big B also has films such as Brahmastra, Chehre and Gulabo Sitabo in the line-up.