Jeetendra, Shobha, Ekta And Tusshar Kapoor In A Major Blast From The Past 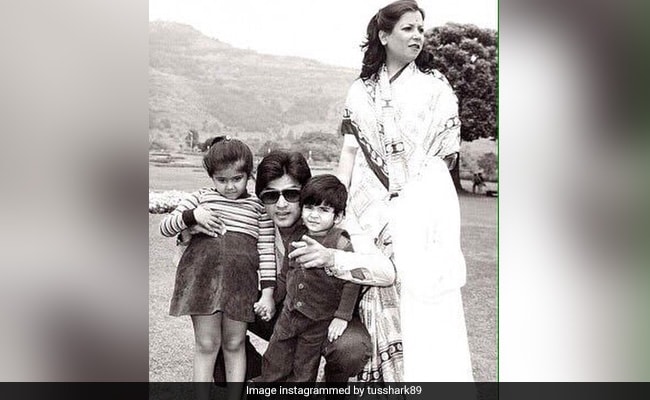 Actor Tusshar Kapoor, on Sunday, shared a special blast from the past to celebrate Parents' Day. The actor shared an album, comprising a throwback picture of himself, his father Jeetendra, mother Shobha and sister Ekta Kapoor, and a recent one featuring his son. In the old black and white photograph, actor Jeetendra can be seen posing for the camera while holding tiny Tusshar and Ekta Kapoor in his arms. Jeetendra's wife can be seen standing near the trio in the picture. In the second photo, Tusshar Kapoor and his son Laksshya can be seen smiling with all their heart for the camera.

Tusshar Kapoor is a single parent. Laksshya was born via surrogacy in the year 2016. The actor often shares pictures and videos of his little son on Instagram. Check them out here:

A rocket moves forward with the pressure of air gushing out in the opposite direction! This one is really simple too, all you need are balloons, some tape, a straw that doesn't bend, a 10ft long string or maybe more, 2 chairs of the same height to tie the string on either side! Probably the last of our experiments, given the holidays have begun! However, we should be back once homeschooling resumes in July/August! #happylearning

My baby turns 4.....to write about my love for you would be reiterating, in fact overstating the obvious! Really speaking, you were, are and will always be my gift from God! Happy birthday my bachcha! #laksshyakapoor #June1st #quarantinebirthday #laksshyaturns4 #babysharkparty #homeiswheretheheartis backdrop deco by @reenz290 @eventsbay

Some Fridays just don't turn out the way they were expected to! Nevertheless, friyay!

The best thing we can do for our kids is to try and instill a love for books, story telling, nature, sharing the planet with animals and outdoor play-sports! This Mother's Day let's celebrate how best we can, as single parents or married couples, enrich the lives of our kids and empower them! All one needs is love and quality time and not pretensions of what a perfect family looks like or needs to be like! Happy Mother's Day!

In terms of work, Tusshar Kapoor was last seen in Booo Sabki Phategi. He will be next seen in Laxmmi Bomb, which has been directed by Raghava Lawrence. The film also features Akshay Kumar and Kiara Advani.