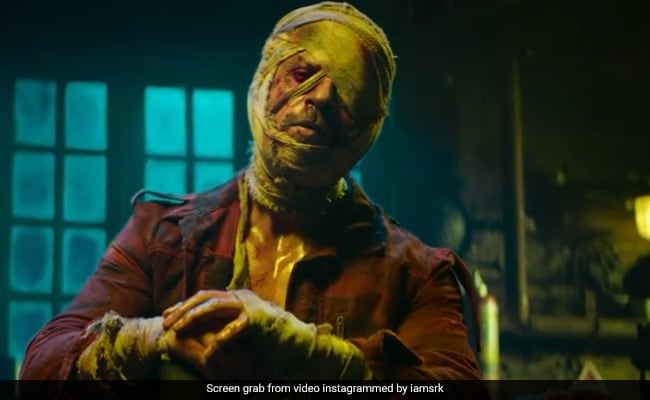 Jawan teaser: SRK in a still from it. (courtesy iamsrk)

Shah Rukh Khan announced his new project on Friday it is super intriguing. SRK's next project is titled Jawan and it will be directed by Atlee. The teaser features SRK in a never-seen-before avatar, with his face partially covered. We get a glimpse of his look in the teaser, where a voice on the phone says "Good to go chief" after which SRK laughs for a while and says "Ready." Sharing the teaser, SRK wrote: "An action-packed 2023! Bringing Jawan to you, an explosive entertainer in cinemas 2nd June 2023. In Hindi, Tamil, Telugu, Malayalam and Kannada." The film will be produced by SRK's wife Gauri Khan.

Meanwhile, the film's director Atlee shared the teaser and he wrote: "Feeling emotional, excited and blessed. Grew up admiring you but never imagined that I would be directing you sir. Shah Rukh Khan and I proudly present to you Jawan. Releasing on 2nd June 2023, in Hindi, Tamil, Telugu, Malayalam and Kannada."

Check out the teaser of Jawan here:

Earlier this year, SRK confirmed his association with filmmaker Atlee for a project. In a tweet praising the trailer of Beast, Shah Rukh mentioned that he is "sitting with Atlee," discussing the trailer of Beast. His tweet read: "Sitting with Atlee, who is as big a fan of Vijay as I am. Wishing the best for Beast to the whole team...trailer looks meaner.... Leaner... stronger."

Sitting with @Atlee_dir who is as big a fan of @actorvijay as I am. Wishing the best for beast to the whole team...trailer looks meaner.... Leaner... stronger!!https://t.co/dV0LUkh4fI

It was previously reported that Shah Rukh Khan will be seen in Atlee's directorial, also featuring Nayanthara and Sanya Malhotra. An Indian Express report quoted a source as saying last year, "While SRK started working on the film last week, Nayanthara joined a couple of days ago. It is also being said that Telugu superstar Rana Daggubati will play the antagonist in the film and he will join the cast later." The movie also stars Sunil Grover reportedly.

Other than that, Shah Rukh Khan also backed the film Love Hostel, which starred Bobby Deol, Sanya Malhotra and Vikrant Massey in the lead roles. He wrapped the Spain schedule of Pathaan earlier this year. The film also stars Deepika Padukone and John Abraham. He will also star in Rajkumar Hirani's Dunki, co-starring Taapsee Pannu.

ICYMI: Kiara Advani And Sidharth Malhotra Made It Instagram Official