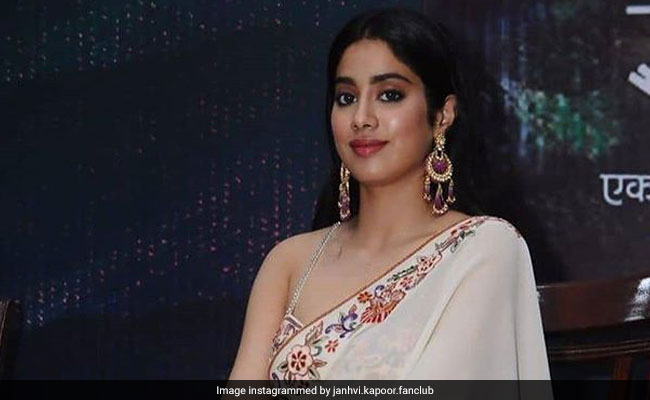 Janhvi Kapoor recently attended a book launch event in the National Capital - she was in Delhi for launching the Hindi version of Harinder Sikka's novel Calling Sehmat. However, the 22-year-old actress found herself at the receiving end of social media trolling as photos of her holding the book upside down at the launch event were shared on social media. "Is she holding the book upside down?" read a comment on a social media post while another rude user wrote: "Holding the book upside down at launch. That's beauty with no brains people." While several users politely reminded the trolls: "Isn't it human to err?" However, trolls will be trolls and Janhvi's photos were flooded with more blunt comments, which are too vile to be reproduced here.

At the book launch event, Janhvi Kapoor was a sight to behold in a pristine saree. Here are the viral pictures in which she can be seen holding the book upside down. Meghna Gulzar's 2018 release Raazi, starring Alia Bhatt, is an onscreen adaptation of Harinder Sikka's Calling Sehmat.

#janhvikapoor today for a book launch in the capital #viralbhayani @viralbhayani

At Book Launch in Delhi.

Since her official entry to Bollywood, the Internet has often targeted Janhvi Kapoor for trolling. Janhvi, who never responds to online trolling, has been criticised for her choice of outfits and for celebrating her birthday last year, months after Sridevi's tragic end. However, Janhvi's brother Arjun Kapoor has always jumped to her defence, shutting down trolls with his stern tweets.