Janhvi Kapoor Or Sridevi, Who Is A Better Dancer? Dhadak Choreographer Says...

Janhvi Kapoor is prepping for her Bollywood debut with Dhadak 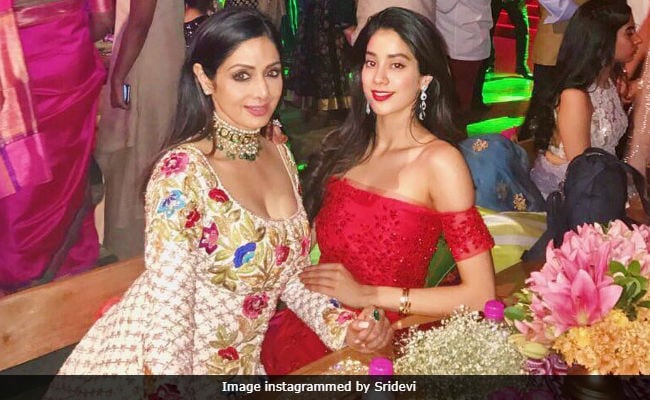 Sridevi and Janhvi during a family wedding. (Image courtesy: Sridevi)

New Delhi: Can Janhvi Kapoor dance as fabulously as her mother Sridevi? Well, Dhadak choreographer Tushar Kalia told news agency IANS that Janhvi has her own style but she is 'as hard-working as her mother.' Janhvi Kapoor is debuting in Bollywood with upcoming film Dhadak, for which Tushar has choreographed a few songs. "I don't think it is right to compare them. Sridevi ma'am is a legend. She is one of my favourite actresses when it comes to dancing... very hardworking and very spontaneous. Janhvi is equally hard-working but she has her own style of dancing."

Tushar Kalia, who has featured in ABCD: Any Body Can Dance, is best known for his performance in celebrity dance reality show Jhalak Dikkhla Jaa in which he partnered with Ekta Kaul and Sana Saeed. Tushar Kalia has also shot two commercials with Sridevi and his Bollywood breakthrough as a choreographer was vis-a-vis Karan Johar's Ae Dil Hai Mushkil.

When asked if a choreographer ever gets his/her due credit, Tushar told IANS: "We have chosen to be behind the camera and that's our work and when the songs do well, everyone appreciates the work and thanks to internet, these days once the song is out everyone knows who has choreographed it."

"I don't think it's correct (to say that). People do notice quality work. If your work is good, you get your due credit. And it's a team work to make a song successful. Actors, singers, music directors and choreographers -- only when all the departments give their best, it's possible to deliver a hit," he added.

Promoted
Listen to the latest songs, only on JioSaavn.com
Dhadak also stars Ishan Khatter, who made his big screen debut in Majid Majidi's Beyond the Clouds. Dhadak is directed by Shashank Khaitan and it is produced by Karan Johar. Dhadak is a remake of Marathi film Sairat and recently Farah Khan choreographed Janhvi and Ishaan in the Jhingat redux for the film.