Janhvi Kapoor Can't Stop Messing Around In This BTS Video

What is this behaviour, Janhvi Kapoor? 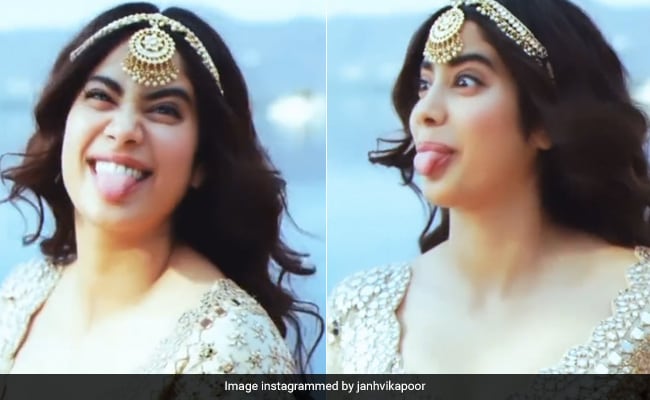 Janhvi Kapoor in still from her Instagram video (courtesy janhvikapoor)

Looks like Janhvi Kapoor is missing photoshoots and going to work quite a lot. To make up for that, she is revisiting old memories, a glimpse of which she shared on her Instagram with the caption "throwback." The behind-the-scenes video shared by Janhvi is from when she was part of a photoshoot for a bridal magazine cover. However, the video is a montage of some of Janhvi's goofy moments on sets - she can be seen singing, grooving and even making faces in between shots. At one point, the camera person asks Janhvi to look into the camera when she says: "Mujhe nahi dekhna (I don't want to look)." LOL. What is this behaviour, Janhvi Kapoor?

When she's not being goofy, Janhvi Kapoor picks up one of her hobbies to keep herself busy. Janhvi's favourite lockdown activity has been painting, a glimpse of which she shared on Instagram recently. Posting a photo from her painting studio, Janhvi Kapoor had this existential question to ask her Instagram family: "Can I call myself a painter yet?"

Talking about being goofy, here's when Janhvi Kapoor explained a last minute fashion faux pas with an ROFL video. Sharing her rendition of the Kajra Re video, Janhvi wrote: "When you realise your Filmfare Red Carpet outfit is not fitting you on D-Day."

In terms of work, Janhvi Kapoor was last seen in horror comedy Roohi. Janhvi Kapoor, who made her Bollywood debut with Dhadak, has starred in films such as Ghost Stories and Gunjan Saxena: The Kargil Girl. Janhvi's upcoming line-up of films includes comedy Dostana 2, co-starring Kartik Aaryan. She will also be seen in Good Luck Jerry.