"Jackie Shroff shared the secret behind his signature way of speaking," Amitabh Bachchan wrote on Instagram 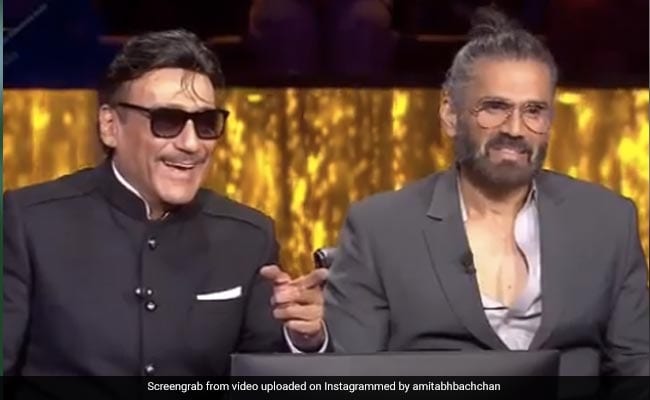 In the KBC promo, Big B asks Jackie Shroff the reason behind his unique way of speaking. Mr Bachchan described it as the "Bhidu bhasha" or the "Bhidu language." In response, Jackie Shroff revealed that Mr Bachchan is partly responsible for it. Jackie Shroff initially resided in a Mumbai chawl during the struggling days of his career as an actor - he said that also greatly impacted the way he speaks. Jackie Shroff even made Mr Bachchan re-enact a dialogue from the movie Amar Akbar Anthony, which influenced his speaking style.

Watch the promo of the Shaandaar Shukravaar episode with Jackie Shroff and Suniel Shetty here:

In an interview with PTI years ago, Jackie Shroff had revealed he had a sudden realization about his stardom when Abhishek and Shweta Bachchan asked for his autograph: "I asked the waiter what time does he come because I really wanted to meet him. But I find his kids coming to take my autograph. I said, 'Wow, here I am waiting to see Bachchan sir and his kids want my autograph!' I realised then that I had become famous."

Amitabh Bachchan and Jackie Shroff have co-starred in films like Sarkar 3, Eklavya and Akalya.