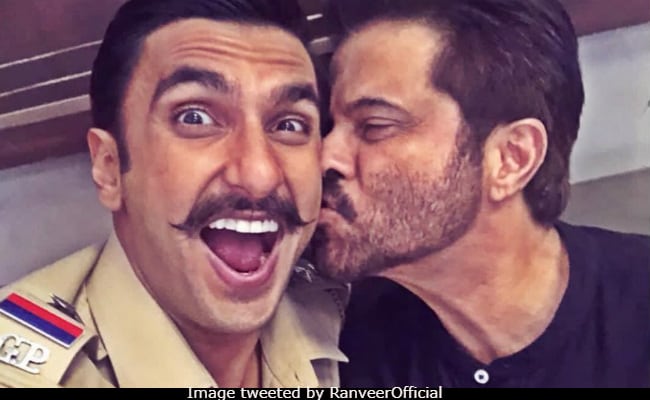 Ranveer Singh aur Anil Kapoor ki photo dekhke dil dhadak gaya! Ranveer drove away all our mid-week blues with a photo of him and his former co-star Anil Kapoor. As much as we love the photo, we must mention that the caption is also on point. In the photo, Anil Kapoor plants a kiss on Ranveer's cheek, who is dressed as cop Sangram Bhalerao from Simmba. "Lakhan x Simmba," he captioned it - Anil Kapoor played a cop named Lakhan in 1989's cult classic Ram Lakhan. Ranveer, however, does not sport the signature expression of a feisty cop in the photo, because the kiss. Anil Kapoor and Ranveer Singh co-starred in Zoya Akhtar's Dil Dhadakne Do - Mr Kapoor played Ranveer's father in the movie.

Anil Kapoor was quick to spot Ranveer's tweet and responded with the most adorable message: "This is what true love looks like! Always proud of you my Tiger!" Interestingly, Anil Kapoor also plugged in Takht, which marks his second collaboration with Ranveer. Shared also on Instagram, Ranveer's photo with Anil Kapoor garnered 3,88,513, 'likes' in just two hours with comments like: "Awesome" flooding the feed. Meanwhile, here's how the Twitter conversation looked like.

Apart from Ranveer Singh and Anil Kapoor, the cast of Takht also includes names like Kareena Kapoor, Alia Bhatt, Janhvi Kapoor, Vicky Kaushal, Bhumi Pednekar and Raveena Tandon. The period drama will be directed by Karan Johar and is slated to hit screens in 2020.

Ranveer Singh co-stars with Sara Ali Khan in Rohit Shetty-directed Simmba. The film marks her Bollywood debut and Ranveer's first project with the director. Simmba is expected to hit screens in December.