'It's Tim,' Not Taimur Ali Khan. Get It, Paparazzi?

You need to watch this viral video, in which the little nawab reveals his favourite nickname 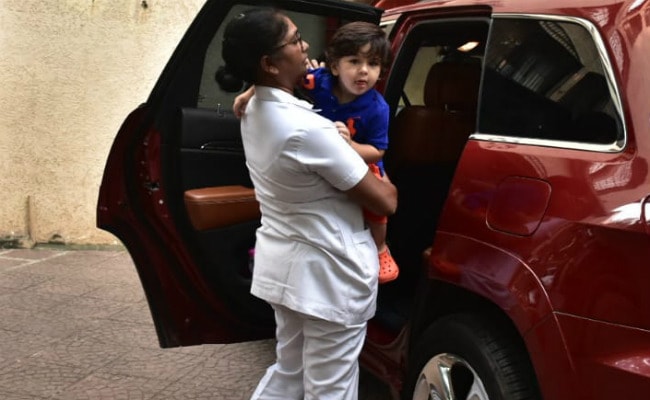 Taimur in Mumbai. So cute

If you thought Kareena Kapoor and Saif Ali Khan's son's name is Taimur, then you need to watch this viral video, in which the little nawab reveals his favourite nickname. In a video, that's crazy viral on the Internet now, baby Taimur can be heard correcting the paparazzi as they called out his name right after he exited the car. "It's Tim!" Taimur says in the video, as he is escorted inside by his nanny. Taimur, whose secret superpower is being adorable, often responds to the paparazzi calling out his name. And on Monday, after having announced his favourite nickname, Taimur adorably bid the paparazzi goodbye. Born to Kareena and Saif in December 2016, Taimur Ali Khan will celebrate his second birthday this year.

Aww, our hearts are melting!

Taimur Ali Khan, who is still getting accustomed to the ways of being a star-kid, rarely appears perturbed by the presence of the prying lenses around him. Instead, the chhote nawab is usually always amused by the popping flashbulbs. Here, take a look:

Earlier in June, a video in which Taimur's nanny can be seen snapping at the paparazzi while exiting Taimur's playschool with him surfaced on the Internet - she appeared offended by the presence of the flocking paparazzi, who repeatedly called out Taimur's name, and quickly took off in the car. In the light of Taimur's growing popularity with the paparazzi, Kareena Kapoor told Hindustan Times in June: "I feel it's getting used to his name being called out and not particularly the cameras around. I don't think he can make out that he's being clicked. He's still too small for that."