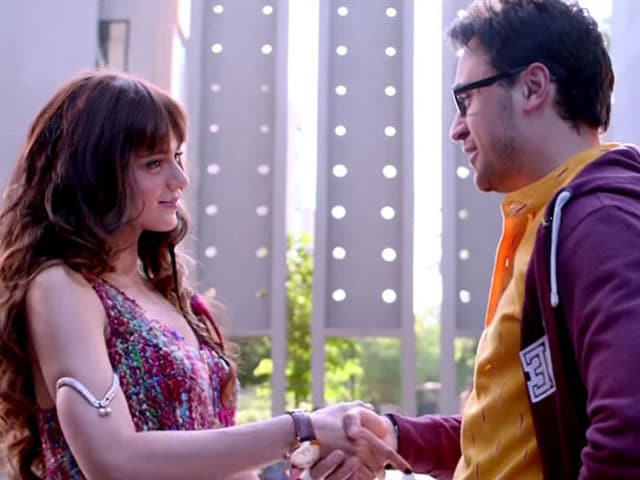 A still from Katti Batti.

Mumbai: While many trolled Bollywood superstar Aamir Khan on social media when he saw Katti Batti and came out of the theatre with tears in his eyes, actress Kangana Ranaut said that the forthcoming romantic thriller has such intensity that it even made her "cry every night" when she was shooting for it.

"For an actor, playing such a character can be very overwhelming and if you are young, it can give some staggering impressions on your mind. I remember after I used to finish shoot, I would just cry every night. When my mother came over, I cried with her too thinking about so many things. So, definitely this is the most intense character I've ever played in a film," Kangana, who plays the role of Payal in the film, told IANS. (Also Read: An Unexpected Party: How Kangana, Imran Ended up in Katti Batti)

The Queen actress also said that like Aamir, people are having "extreme reactions" to the film.

"Like Aamir, people are having extreme reactions. They are jumping the gun because the marketing of the film has been such. Katti Batti looks like a rom-com, but it's not at all. When people are going to come and see the film they are going to witness a larger than life story. The intensity of characters in the film is exceptional," she added.

Directed by Nikhil Advani, Katti Batti, which also stars Imran Khan, is based on new-age relationships. It starts like a romantic comedy but gradually turns into a thriller with a mystery element a mature love story.

"Katti Batti unfolds in a thriller format. Yes there are songs and various funny moments in the film. But, I'm not a crime person at all. When you see the movie, you yourself will realise what will make you cry and they are things that you have done yourself," said Kangana, who has previously received acclamation for her roles in films like Fashion, Queen and Tanu Weds Manu series. (Also Read: Kangana Ranaut: Katti Batti's Payal Tougher to Play Than Datto)

The actress also said that she wants to experience people's reactions to her films.

"So when people cry in my films, I wish I could experience what they experience. For me it's damaged, I've done it. But when I saw Katti Batti, I cried and was like 'Oh god that is some intense thing going on there'. I also told Nikhil that you have made such a 'rondu' (emotional) film. But, if I could cry then everyone would cry. Some people like to cry in theatres so they would be very happy with this film," she added.

Katti Batti will hit the screens on September 18.