"It's Good To Be Queen": Preity Zinta Shares Her Victory Moment After Playing Monopoly With Family 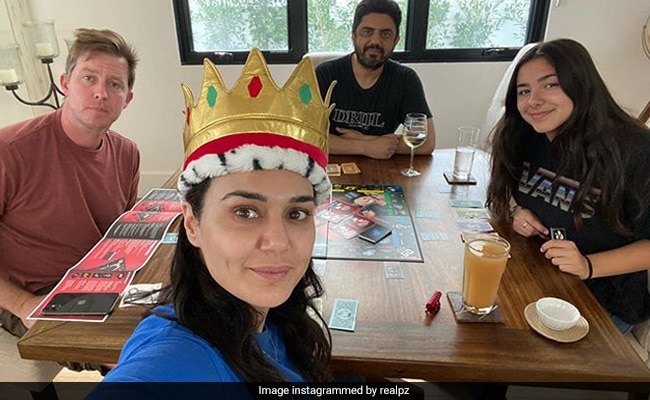 Playing board games is one of the best and easiest ways to kill time during the lockdown and Preity Zinta knows this very well. The actress, who is currently in lockdown with her family, shared glimpses of her Monopoly session on Thursday and showed off her victory moment in a really adorable way. The actress shared two photos on Instagram. The first one is a family picture, which features her wearing a crown with husband Gene Goodenough sitting next to her while the second photo shows the Monopoly cards and even plastic handcuffs for players sent to jail in the game. "It's good to be queen," Preity wrote while sharing the photos and used hashtags like #monopolyqueen #boardgames #family and #fun in her post.

The plastic handcuffs used by Preity and her family during the Monopoly session grabbed Sussanne Khan's attention and she went on to comment on her post: "Wow, I love this version! You have handcuffs!"

Preity Zinta's lockdown diaries include her workout videos and her cooking pictures. Most of the time, her posts also feature her pet dog Bruno. She once shared a video of herself exercising, in which Bruno could be seen adorably interrupting her and trying to get her attention.

Our favourite turned out to be the one in which the actress could be seen working out with Bruno. Here's the post we are talking about:

Nothing like an improvised workout. Bruno gets to play tug-o-war ( it's great for building confidence and jaw strength in puppies ) and I get to do biceps curlsOf course I could not do more than 7 cuz he's too heavy but we still did a few This pandemic may have kept us Indoors but it will NOT break our spirit. #lageraho #pzfit #stayhome #staysafe #day24 #quarantine #dutchie #dutchshepherd #dogsofinstagram #bruno #ting

On the work front, Preity Zinta is best-known for her performances in films such as Dil Se, Lakshya, Salaam Namaste and Dil Chahta Hai among many others. She was last seen in the 2018 comedy film Bhaiaji Superhit. She is an entrepreneur and is the co-owner of the IPL team Kings XI Punjab.