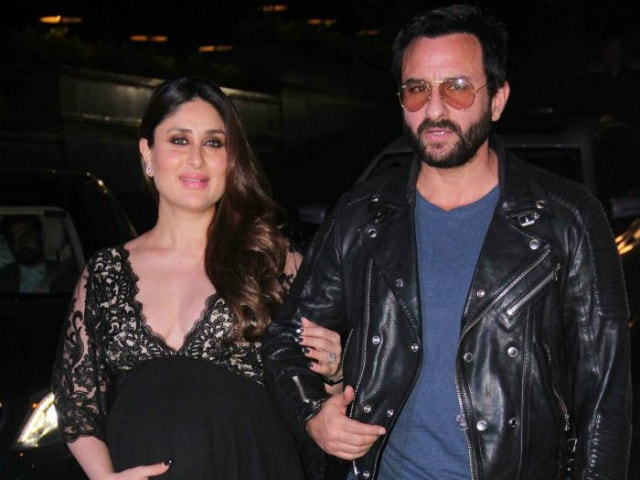 New Delhi: Actors Kareena Kapoor and Saif Ali Khan welcomed their first child, a son they've named Taimur, in Mumbai's Breach Candy Hospital at 7.30 am on Tuesday. In a statement, Kareena and Saif said: "We are very pleased to share with you all the wonderful news about the birth of our son: Taimur Ali Khan Pataudi, on the 20th of December 2016. We would like to thank the media for the understanding and support they have given us over the last 9 months, and of course especially our fans and well wishers for their continued affection. Merry Christmas and a happy new year to you all."

A couple of months ago, Saif dismissed reports of a gender test as well as rumours that the baby would be born in London and was to be named Saifeena. Kareena Kapoor, 36, and Saif Ali Khan, 46, married in 2012. They dated for four years after co-starring in 2008 film Tashan. Saif Ali Khan has two children already with ex-wife Amrita Singh - daughter Sara and son Ibrahim.

On Monday, Saif said in a press release, "To have a child now completes us. There is something about a baby that is kind of half mine and half of hers, so, it's a nice feeling."

Promoted
Listen to the latest songs, only on JioSaavn.com
Kareena Kapoor is perhaps the first Indian actress to have been cast in a film, Veere Di Wedding with Sonam Kapoor, while pregnant. She was last seen in Udta Punjab opposite Shahid Kapoor, Alia Bhatt and Diljit Dosanjh.

Kareena, who walked the ramp for Sabysachi at the Lakme Fashion Week some months ago, was spotted about town last week. She was pictured at best friend Amrita Arora's Christmas party, catching up with actress Simi Garewal over dinner and having lunch with her sister Karisma and Amrita. Kareena Kapoor is the daughter of actors Randhir Kapoor and Babita and the granddaughter of Raj Kapoor. Shammi and Shashi Kapoor are her granduncles, Rishi and Neetu Kapoor her uncle and aunt-in-law and Ranbir Kapoor her cousin. Saif Ali Khan is the son of cricketer Mansur Ali Khan Pataudi and actress Sharmila Tagore.