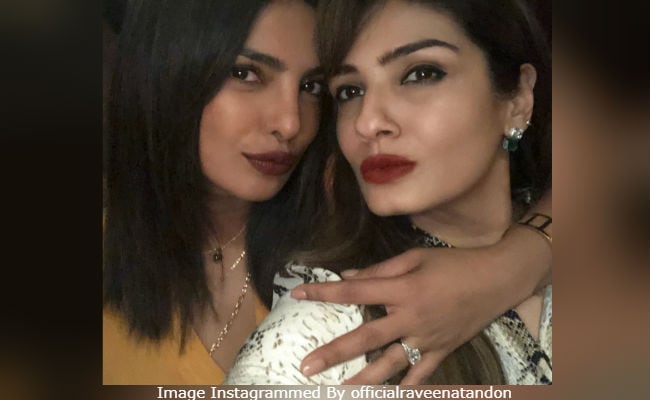 'Is Priyanka Chopra really engaged to American singer Nick Jonas?' This is what everyone wants to know. Isn't it? Priyanka Chopra, Nick Jonas and their rumoured engagement trend on and off. And, yet again, the Internet's busy figuring it out, after Priyanka Chopra's picture with Raveena Tandon, from Manish Malhotra's party went viral. In the selfie posted by Raveena, we can see a massive diamond ring sparkling on Priyanka's ring finger. "Wait, is that your engagement ring?" a user posted on their picture while a section of the Internet has already concluded that it's the ring with which Nick proposed to her. "Aaand the confirmation everyone is wanting... the ring!" and "we found the ring, THE RING" are some of the other comments.

Peecee and I getting our pouts in order !

International websites had reported that Nick Jonas had shut down an entire Tiffany's store (in New York) to pick out Priyanka Chopra's ring. He had proposed to Priyanka on her 36th birthday while vacationing in London.

Last week, when Priyanka Chopra landed in India, she appeared to have taken off a ring before exiting the airport. In a video, shared widely on social media, she was seen sneakily removing a ring from her finger and keeping it in her pocket.

Meanwhile, at an event in New York, when Nick Jonas was congratulated for his rumoured engagement to Priyanka Chopra, he responded in kind and said, "Thanks man!," US Weekly reported .

Priyanka Chopra and Nick Jonas haven't yet given any confirmation on their rumoured engagement. However, several unconfirmed reports suggest that the duo are looking forward for a wedding in September.