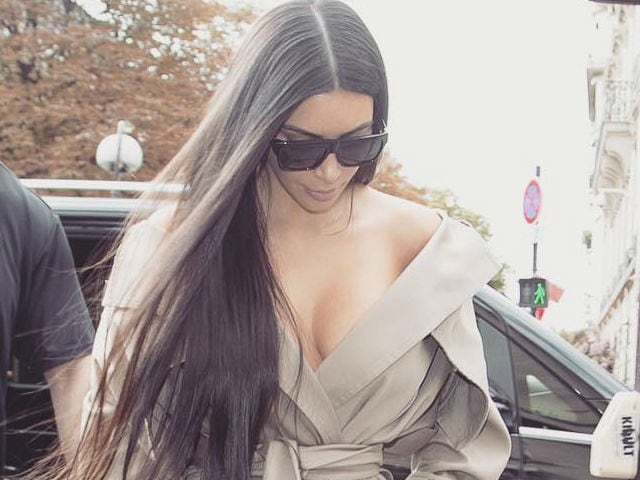 This image was posed on Instagram by Kim Kardashian

Washington: After a nearly month-long retreat from the public eye, Kim Kardashian appeared to finally take a step toward the social media spotlight - but then quickly stepped back into the shadows again.

The Keeping Up with the Kardashians star has kept a notably low profile since she was robbed at gunpoint during Paris Fashion Week in October, and her social media accounts have been dark for weeks.

But on Monday, three new posts appeared on Kardashian's Facebook page: a link to family videos from her childhood, a list of last-minute Halloween costumes and a photo of Kardashian looking at her phone. For Kim-starved fans, it was a tantalizing hint that she just might be back - but then all three posts were mysteriously deleted less than 24 hours later, leaving Kardashian's followers as uncertain as ever about the future of her online life.

The trio of Facebook posts had marked her first return to social media since the robbery, a trauma that profoundly affected Kardashian, those close to her have said. Filming for Keeping Up With the Kardashians was put on hold after the incident - "Kim's well-being is our core focus right now," an E! spokesman said at the time - and Kardashian's friends and family have drawn a protective circle around her as she recovers.

In more recent weeks, there have been signs that the social-media star is slowly returning to a more normal routine: She recently resumed filming for her family's reality show, and she appeared (with plentiful security) at husband Kanye West's shows in Los Angeles last week, according to media reports.

On Sunday, she ventured out with longtime friend Jonathan Cheban, visiting a frozen yogurt shop favored by paparazzi - which prompted Page Six and New York Magazine to claim that the outing was staged by her reps, part of a carefully calculated, gradual return to the public realm. After all, a reclusive existence isn't exactly an option for a star who has built a brand and a career out of documenting her every thought, outfit and movement.

"I totally attribute my career to social media," Kardashian said in a 60 Minutes interview - taped before the robbery - that aired October 23. "There are pitfalls," she added - "lack of privacy, and that's not for everyone. For me, I can handle it."

But many predicted that her relationship to social media would inevitably change after thieves attacked Kardashian and robbed her of more than $10 million in jewelry, a crime that police said was probably precipitated in part by her social media presence; she had shared a photograph of herself wearing an enormous diamond ring only hours before the robbery.

Even as the now-deleted posts appeared on Kardashian's Facebook page Monday, it wasn't clear that she had posted them herself, as some fans and media reports noted. Her friends and family have helped her maintain her personal app for weeks, sharing new content on her behalf, which made it seem plausible that they might do the same elsewhere online. People magazine pointed out that the photo of Kardashian posted Monday appeared to be old - she was pictured with her BlackBerry Bold, which broke in August - and the links shared on her Facebook wall tagged her sister and her assistant in a way that might suggest they had written the posts themselves.

Before the posts were taken down, Kardashian's fans flooded her page with joyful messages and words of support.

Some were determined to view the new posts as a certain sign of her return: "So happyyyyyy right now!!!" one Facebook user gushed. "Kim is back and looking amazing."

Others seemed more cautious, even as they welcomed a sign of activity. "I'm sure Kim doesn't post herself on this page," another fan wrote. "However I want to tell her that I miss her."