According to reports, Farhan Akhtar and Shibani Dandekar spent some time in London together last month 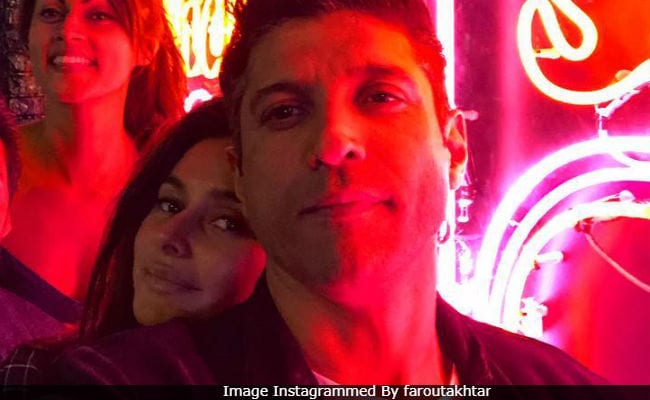 Farhan Akhtar is apparently dating model-TV presenter Shibani Dandekar. This is what several unconfirmed reports stated on Thursday. Farhan and Shibani have found a spot on the trends list too. According to reports, the duo spent some time in London together last month. Farhan has also shared a picture with Shibani and a couple of other friends on Instagram from London and captioned the post as, "Ooh... Aah... take the world and paint it red." He also added hashtags like 'Night Walkers,' 'Fun Times,' 'Keep Exploring' and 'Hanging Out' to the post. Here's Farhan Akhtar and Shibani Dandekar's photo.

Asked if she's actually 'dating' Farhan Akhtar, Shibani Dandekar told SpotboyE, "I have no clue about this."

Farhan Akhtar and Shibani Dandekar met on the sets of 2015 TV show I Can Do That, hosted by the actor. Shibani was a participant in the show, which also featured TV stars like Gauahar Khan, VJ Bani, Rithvik Dhanjani, Bharti Singh and Gurmeet Choudhary. I Can Do That was based on an American TV show where participants had to challenge their own skills.

Meanwhile, Farhan Akhtar, 44, was previously rumoured to be dating actress Shraddha Kapoor, 31, with whom he co-starred in Rock On 2. They made headlines for a reported romance, but never acknowledged any speculation.

Farhan divorced Adhuna Bhabani last year in April. They had got married in 2000 and are parents to two daughters Shakya and Akira.