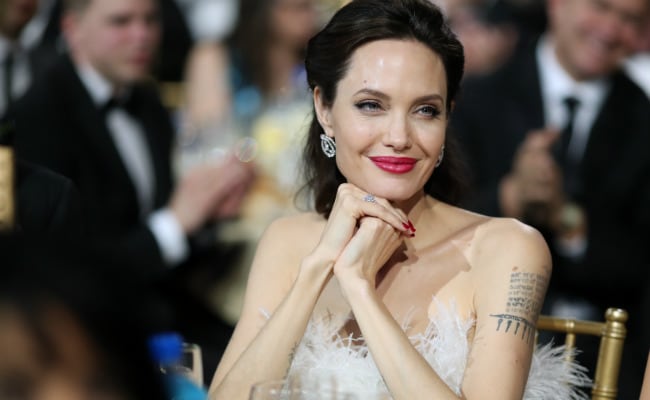 New Delhi: Angelina Jolie has no time for rumours - she is busy attending Hollywood award shows, courtesy her last-directed project First They Killed My Father (a film about genocide in Cambodia), which holds several nominations. Angelina was just spotted walking the red carpet in a Ralph & Russo ensemble at the Critics' Choice Awards in California but that's not the only reason she's trending. The Hollywood A-lister has been featuring in headlines in connection with dating rumours with Cambodian filmmaker PraCh Ly. It all started when a report in OK! Magazine quoted a source saying that Angelina and PraCh are "a perfect match." Soon, people.com reported another insider rubbishing the rumours. The rumours arise a year after Angelina Jolie and Brad Pitt filed for divorce in September 2016.

"She isn't dating anyone and won't be for a very long time. She is focused on her children and their needs," People quoted the source as saying, who also added that the two are just friends and that the Cambodian filmmaker is a fan of Angelina's work. PraCh Ly and Angelina are said to have met in Cambodia through Cambodian activist Loung Ung, on whose memoir First They Killed My Father is based.

Promoted
Listen to the latest songs, only on JioSaavn.com
Angelina and PraCh Ly have also been spotted attending the same events during the film's promotions in Cambodia, and Loung Ung was also there. Some gossip columns also reported that PraCh Ly has bonded well with Angelina's eldest son Maddox (who is of Cambodian origin) already. Apart from Maddox, 16, Angelina and Brad are parents to Pax, 14, Zahara, 13, Shiloh, 11, and 9-year-old twins Vivienne and Knox (the youngest three are their biological kids), all of who stay in Jolie's Malibu residence.

Angelina Jolie, 42, and Brad Pitt, 54, announced in September last year they were separating after 12 years of being together and two years married. However, the former couple have reportedly put their divorce on hold.