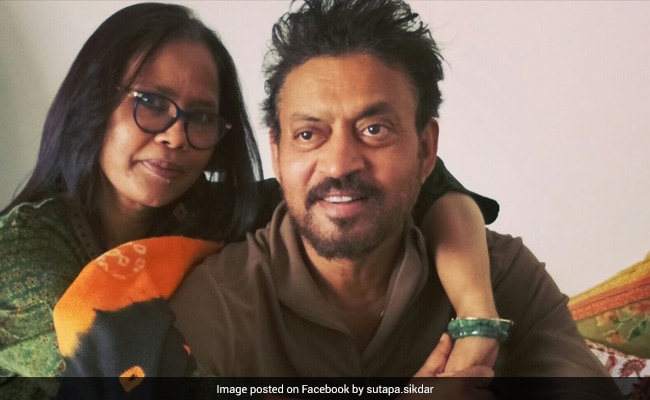 Irrfan Khan's wife Sutapa Sikdar, on Friday, shared a picture of his grave covered with rose petals and accompanied it with a touching note. Irrfan Khan died in Mumbai on April 29 this year. To express her emotions, Sutapa borrowed few lines from the poem A Fantasy, written by American poet Louise Gluck's, who won the 2020 Nobel Prize in Literature on Thursday. "I'll tell you something: every day, people are dying. And that's just the beginning. Every day, in funeral homes, new widows are born, new orphans. They sit with their hands folded, trying to decide about this new life. Then they're in the cemetery, some of them for the first time. They're frightened of crying, sometimes of not crying. Someone leans over, tells them what to do next, which might mean saying a few words, sometimes throwing dirt in the open grave," wrote Sutapa.

"And after that, everyone goes back to the house, which is suddenly full of visitors. The widow sits on the couch, very stately, so people line up to approach her, sometimes take her hand, sometimes embrace her. She finds something to say to everybody, thanks them, thanks them for coming. In her heart, she wants them to go away. She wants to be back in the cemetery, back in the sickroom, the hospital. She knows it isn't possible. But it's her only hope, the wish to move backward. And just a little, not so far as the marriage, the first kiss - by #LouiseGluck #Nobelprize #celebratinglifeanddeath," read her full post.

Sharing the same picture, Irrfan Khan and Sutapa's son Babil also wrote an emotional note about the late actor's "forgiving and sensitive soul." An excerpt from his post read: "Here's to watching Stalker with you for my first film essay three years ago, I'm watching Stalker now for the last dissertation. I pause the film from time to time, just like you did with me, to take it all in."

"When a man is just born, he is weak and flexible. When he dies, he is hard and insensitive. When a tree is growing, it's tender and pliant, but when it's dry and hard, it dies. Hardness and Strength are death's companions. Pliancy and weakness are expressions of the freshness of being. Because what has hardened will never win." - Tarkovsky . Here's to watching 'Stalker' with you for my first film essay three years ago, I'm watching 'Stalker' now for the last dissertation. I pause the film from time to time, just like you did with me, to take it all in, you were teaching me then, now I teach myself. Here's to you, who never hardened, here's to your forgiving, sensitive soul.

A couple of days ago, Sutapa reacted to a fan's comment about Irrfan Khan's grave being left unattended. After a user posted a picture of the actor's grave and said it looks like a "trash dumpster," both Sutapa and Babil reacted to the comment by sharing lengthy posts on their respective social media profiles. Take a look:

Baba liked it wild, Ayaan is staying strong :* mamma recently wrote about the wilderness around when some of his fans were worried that it looked unkempt, I need you to understand, he always always wished to be surrounded by the grass and the plants and the trees. Waste and plastic is always removed from that wilderness. Here's what my beautiful mamma wrote: "Women are not allowed in Muslim graveyards. Hence, I have planted the raat Ki Rani in Igatpuri where I have a memory stone of his...where I have buried his fav things .I own that place Where I can sit for hours without any one telling me I can't sit next to him. He is there in his spirit. But that doesn't mean the graveyard shouldn't be tended ..but as far as how is a very questionable thing... The wild plants grass have grown in rains.. It's wild and beautiful is what I saw in the photo you are mentioning..it rains and plants come and they wither in the next season..and then one can clean it. Why should everything be exactly as per definition.. And the plants have grown may be for a purpose look closely."

Irrfan Khan was known for his performances in critically acclaimed films such as Paan Singh Tomar, The Namesake, Maqbool, Haasil, Haider, Piku and Talvar among others.