"Well the villain was unlike Gabbar but yes Irrfan will always be remembered," Tigmanshu Dhulia wrote 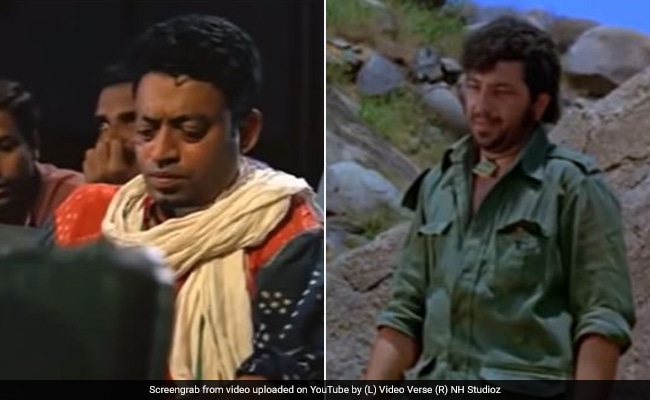 "This villain will be remembered like Gabbar Singh," Irrfan Khan said this about his character Ranvijay Singh from the 2003 film Haasil. Filmmaker Tigmanshu Dhulia, who directed Haasil, revealed this interesting anecdote about Irrfan on Twitter as the film completed 18 years of its release on May 16. In his tweet, the director wrote that Irrfan had believed Ranvijay Singh had the potential to be remembered like Gabbar Singh in the Hindi cinema, the antagonist played by Amjad Khan in the 1975 classic Sholay.

Remembering Irrfan, Tigmanshu shared that the actor had visited him while he was working for the background score of the 2003 film. "(He) said this villain will be remembered like Gabbar Singh," an excerpt from Tigmanshu's tweet read. Tigmanshu added, "Well the villain was unlike Gabbar but yes Irrfan will always be remembered."

Haasil...16th of May the film did wonders for us I remember doing the background score and irfan dropped in we were working on the climax he saw it said this villain will be remembered like Gabbar Singh...well the villain was unlike Gabbar but yes Irfan will always be remembered

Irrfan was cast as Ranvijay Singh, a student politician in a negative role in Haasil. Apart from him, the film also featured Jimmy Shergill, Hrishitaa Bhatt and Ashutosh Rana. While Jimmy and Hrishitaa were paired opposite each other as Aniruddh and Niharika, Ashutosh played the role of Gaurishankar Pandey, a politician.

The film was based on the concept of student politics in the University of Allahabad. Irrfan as Ranvijay and Ashutosh as Gaurishankar played each other's rivals in the movie.

Irrfan Khan's character in the 2003 film is still remembered by cinephiles. Irrfan was honoured with the Best Actor In A Negative Role trophy for his role in Haasil at the Filmfare Awards back then.

Irrfan Khan died on April 29, last year. He was diagnosed with a neuroendocrine tumour in 2018. His last film was Angrezi Medium, that released in 2020.

Meanwhile, Amjad Khan's character Gabbar Singh in Sholay was a ruthless dacoit. Even after decades of the film release, Gabbar Singh still remains one of the iconic villains of the Hindi cinema.