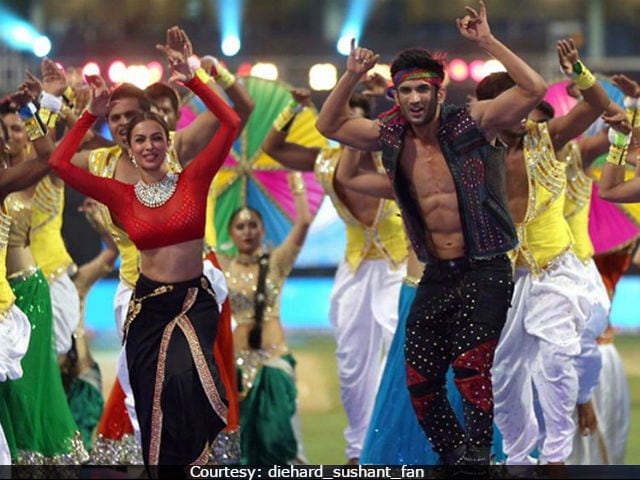 New Delhi: Actors Sushant Singh Rajput and Malaika Arora Khan were the star performers at Mumbai's Wankhede Stadium, where the match between Indian Premiere League (IPL 10) teams - Mumbai Indians and Kolkata Knight Riders was hosted. Sushant arrived will full swag as he made a grand entry with his dance moves on Govinda Aala Re while Malaika grooved to Dholi Taro Dhol Baaje. Together, the duo performed to Rang Barse and Badrinath Ki Dulhania title song. Their performance was backed by massive cheers from all over the stadium. Ahead of the performance, Sushant updated his fans with a picture from the rehearsals. "Back to a Cricket Stadium after a while. This time to celebrate it," the actor captioned the post.

Rewind the IPL 10 night with these pictures:

A post shared by Malaika Arora Khan (@malaikaarorakhanofficial) on Apr 9, 2017 at 5:33am PDT

What an energetic performance @itsSSR senior . U rocks the opening ceremony .. It was terrific dance with #MalaikaAroraKhan .

@itsSSR Hello Prince Charming, it was like a dreamy trice! (Made me remember one of lord Sri Krishna's stunts)
Do tell, how to get over u?

Meanwhile, Twitter was disappointed with Amy Jackson's performance at the opening ceremony in Hyderabad. Soon after her performance, Amy was trolled massively and her performance was termed as "pathetic" and "hilarious."

Promoted
Listen to the latest songs, only on JioSaavn.com
Bollywood celebrities like Riteish Deshkmukh, Tiger Shroff and Disha Patani have also been a part of the big night and impressed the viewers with their dance moves. However, Sushant and Malaika's performance has got maximum appreciation and was one of the top trends on the Internet.

Sushant Singh Rajput is the star of films like Kai Po Che!, Shuddh Desi Romance and Detective Byomkesh Bakshy!. He was last seen in Neeraj Pandey's sports biopic M.S. Dhoni: The Untold Story, where he featured as Indian cricketer Mahendra Singh Dhoni. He is currently prepping for Raabta.