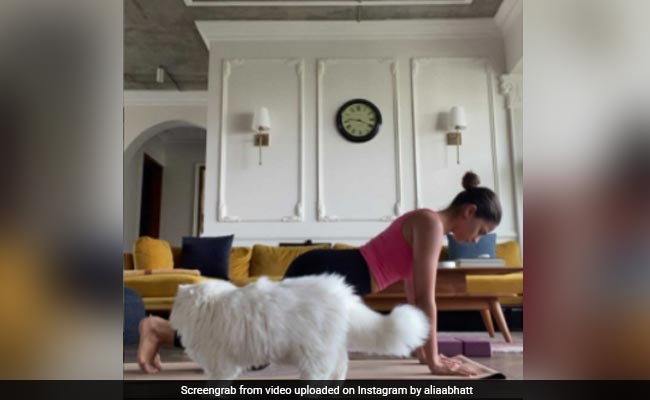 Alia Bhatt in a still from the video. (courtesy aliaabhatt)

Alia Bhatt, who is largely a Pilates girl, ditched her staple workout regime and did some yoga. Keeping up with the spirit of International Yoga Day, the actress shared her first ever Instagram Reel on the platform on Monday. In the video, Alia Bhatt can be seen nailing the asanas with utmost ease. However, it wouldn't be wrong to say that the highlight of the video has to be when Alia's pet cat Edward amusingly looks at Alia in the video. Alia picked a comfy outfit for her yoga day - pink t-shirt and black track pants. She styled her hair in a top knot. She picked BTS' popular track Butter to go with her video.

"Happy, happy yoga day," the 28-year-old actress captioned the video and she added the hashtag #BreatheForIndia to her post. Check out the video shared by Alia Bhatt here:

Alia Bhatt  has a busy schedule this year, with several film releases lined up. Her upcoming projects include Ayan Mukerji's fantasy trilogy Brahmastra, co-starring boyfriend Ranbir Kapoor and Amitabh Bachchan, and SS Rajamouli's RRR with Ram Charan, Jr NTR and Ajay Devgn. She will also be seen in Gangubai Kathiawadi, which has been directed by Sanjay Leela Bhansali. It is her first project with the filmmaker. Alia Bhatt was last seen in Sadak 2, co-starring Aditya Roy Kapur, Sanjay Dutt and Pooja Bhatt.