Inside The Ambani Party: A Pic Of Akash And Shloka, Courtesy Karan Johar 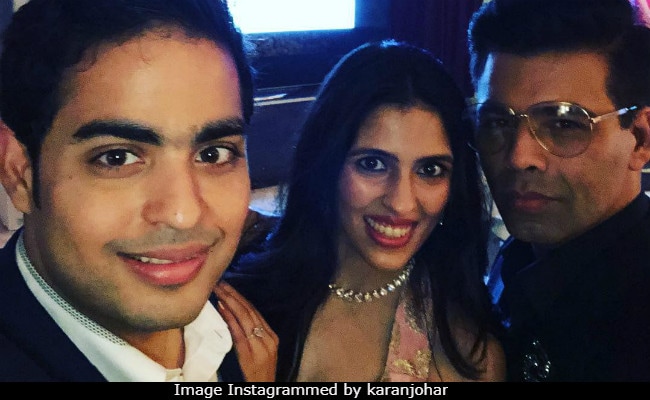 New Delhi: The Ambanis hosted a grand bash for Akash Ambani and Shloka Mehta (who got engaged over the weekend) on Monday evening in Mumbai and in attendance was Karan Johar along with other Bollywood A-listers. The 45-year-old filmmaker added a congratulatory message for the young couple - Akash Ambani and his fiancee Shloka - along with a selfie on Instagram. Karan Johar's photo is just one of the glimpses from inside the party, which was held at Antilia - the Mumbai residence of the Ambanis. "Congratulations to this adorable couple," Instagrammed Karan and followed up the caption with lots of 'heart' emojis.

Congratulations to this adorable couple!!!!! #akashloka..

Other celebrities who joined Akash and Shloka at the post-engagement party also included Shah Rukh Khan, Aishwarya Rai Bachchan, who came with her daughter Aaradhya, Katrina Kaif, Zaheer Khan and his wife Sagarika Ghatge and Aamir Khan's wife Kiran Rao. Videos of celebrities arriving at Antilia last night have been shared in plenty on social media and here are a few of them.

Apart from the young couple and celebs, the Ambani party also had another delicious attraction - it was the multi-tiered cake which looked every bit fabulous. "Put my heart and soul into this one, to make it as perfect as possible," wrote Bunty Mahajan who designed the cake.

Singer Zubin Nautiyal, who was also on the guest list, was the star performer of the night. Zubin, who shared several photos from inside the party with the hosts - Reliance boss Mukesh Ambani, the newly-engaged couple and the groom's brother Anant Ambani - reportedly performed Bollywood romantic numbers like Agar Tum Saath Ho, Ik Vaari Aa and Kuch To Bata, stated mid-day.

Akash Ambani and Shloka Mehta (daughter of diamond merchant Russel Mehta) are all set for a December wedding, which is reported to be a 4-5 day affair with a plush Mumbai hotel as the venue.