On Christmas Day, Sara Ali Khan delighted everyone with million dollar photos with her family on Instagram 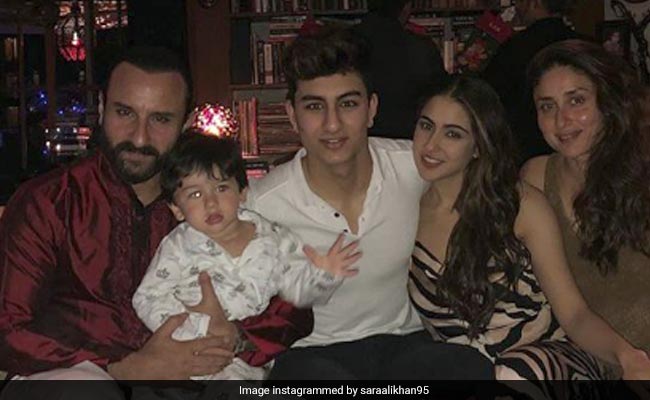 On Christmas Day, Sara Ali Khan delighted everyone with million dollar photos with her family on Instagram. The photos shared by Sara features herself with Saif Ali Khan, Kareena Kapoor and her brothers Ibrahim and Taimur Ali Khan. Sara Ali Khan wished everyone with the pictures on her Instagram timeline and wrote: "Merry, merry, merry Christmas to everyone." The photos posted by Sara appear to be from the dinner party hosted by Saif and Kareena at their residence on Christmas eve. Sara Ali Khan was dressed in an animal print jump suit while her brother Ibrahim was casually dressed for the occasion. Taimur looked cute as a button in his night suit. Saif opted for a maroon kurta and white pyjama while Kareena wore a beige tank top and black pants.

Meanwhile, Sara Ali Khan, who made her Bollywood debut with Kedarnath this year, is currently awaiting the release of her next film Simmba, a cop drama, which also stars Ranveer Singh and Sonu Sood. Directed by Rohit Shetty, Karan Johar produces Simmba. The film is set to hot the screens on December 28.