Inside Pic From Varun Dhawan And Natasha Dalal's Jaimala Ceremony

This picture of Varun Dhawan and Natasha Dalal has our heart 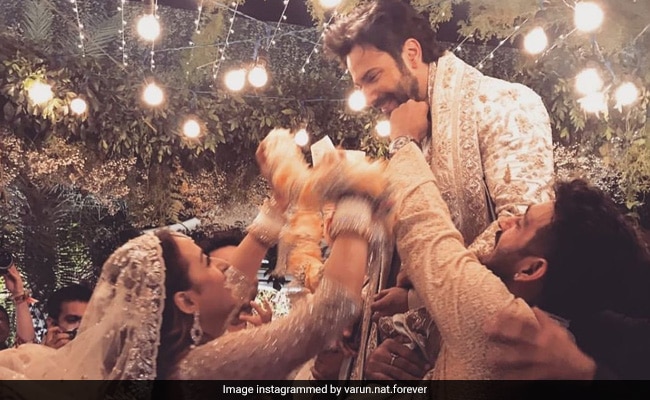 Natasha and Varun at their wedding. (courtesy varun.nat.forever )

Pictures from Varun Dhawan and Natasha Dalal's Alibaug wedding keep getting better and better. The couple got married at the Mansion House on Sunday, in the presence of a few friends and family members. Several fan pages dedicated to the actor and the newlywed couple have actively been sharing pictures from their wedding festivities. On Wednesday, we chanced upon a priceless picture from Varun and Natasha's jaimala ceremony. In the picture, the couple can be seen exchanging garlands and they can be seen smiling with all their hearts. Both Varun and Natasha picked embroidered white ensembles for their big day.

Earlier on Wednesday, Varun thanked his fans for all the love  that they have been showering on the couple and wrote: "The last few days, me and Natasha have received so much love and positivity from everyone. So just wanted to thank everyone from the bottom of my heart." Thanking the wedding planers in a separate tweet, the actor wrote: "Thank you for making this happen."

Thank you for making this happen @shaadisquadpic.twitter.com/odyyRF0B95

Varun Dhawan and Natasha Dalal, who had been dating for several years, went to school together. They were reportedly meant to get married last year but they had to postpone their wedding because of the COVID-19 pandemic and the lockdown. Varun confirmed dating Natasha during Karan Johar's talk show Koffee With Karan 6.