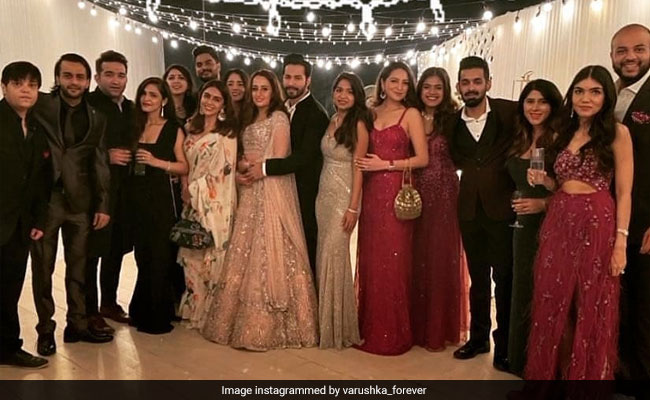 Bollywood star Varun Dhawan and his wife and fashion designer Natasha Dalal surely know how to party in style. The reason we brought this up today is because we chanced upon a million-dollar picture from their wedding festivities. In the picture, both Varun and Natasha can be seen happily posing along with their friends. For the party, Varun Dhawan opted for a classic black suit with a white shirt, while Natasha looked stunning in an embellished soft pink outfit. The photograph was originally shared by actress and Varun Dhawan's friend Zoa Morani, who also attended the wedding. The picture was later shared by several fan pages dedicated to Varun and Natasha.

Varun Dhawan and Natasha Dalal had a fairytale wedding at Alibaug's The Mansion House on Sunday evening. The wedding was attended by only a few close friends and family members. Varun and Natasha, were seen twinning in white embellished outfits for their special day. Natasha Dalal has a private Instagram account but Varun Dhawan was quick to share the pictures from the wedding on his profile. "Lifelong love just became official," wrote the actor.

Varun Dhawan and Natasha Dalal, who had been dating for a long time, reportedly had a 2020 wedding planned. However, they postponed it due to the coronavirus pandemic as well as the lockdown. In December, while talking to Varun on her radio show What Women Want, Kareena Kapoor called Natasha Dalal his "fiancee," confirming that the duo got engaged last year.