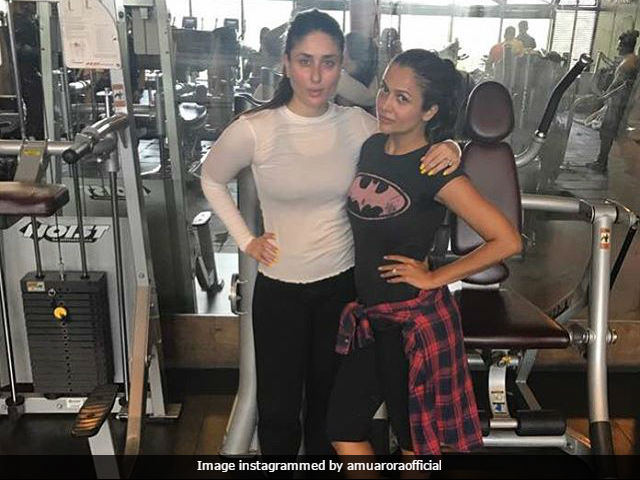 Amrita Arora and Kareena Kapoor sweating it out at the gym (Image courtesy: Amrita Arora)

New Delhi: Actress Kareena Kapoor Khan is all set to return to the big screen with Shashanka Ghosh's Veere Di Wedding. The 36-year-old actress has often been spotted religiously working out post her pregnancy. Today, Kareena's best friend Amrita Arora shared a series of pictures and videos with the Omkara actress in which the duo can be seen sweating it out at the gym. In the pictures, Kareena can be seen sporting white full sleeves t-shirt paired with black track pants and light blue sneakers. Amrita Arora wore a black t-shirt paired with a red and black checkered shirt, black short tights and pink sneakers.

From jogging to kettle bell squats, the videos shared by Amrita Arora will surely motivate you to hit the gym. The 36-year-old actress captioned one image as: "Besties who gym together hmmmmm lose weight together ? #gymtime #nopainnogain #staytunedfoemore #andthenweyak (sic)."

Check out the videos and pictures shared by Amrita Arora here:

Amrita Arora and Kareena Kapoor have co-starred in films like Kambakkht Ishq and Golmaal Returns.

Kareena Kapoor married actor Saif Ali Khan in 2012 and the couple welcomed their first child, Taimur on December 20, 2016. The duo have worked together in films like Omkara, Agent Vinod, Tashan and Kurbaan.

Promoted
Listen to the latest songs, only on JioSaavn.com
Recently, a picture of Kareena Kapoor and Saif Ali Khan's son Taimur went viral on the Internet. In the picture, the little one was seen cradled in the arms of a lady (whom we couldn't identify). See the adorable picture below: