Inside Kajol's Pre-Birthday Celebrations: Tanishaa Mukherji Is "Ready To Pass Out", Because Food Coma

Kajol also shared an ROFL photo from the lunch party 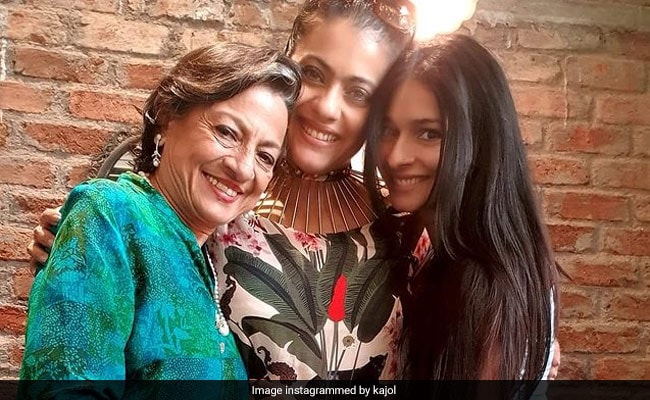 Celebrations for Kajol's 47th birthday began a day early with a scrumptious lunch and her two partners in crime. On Wednesday, Kajol was treated to a lunch date by sister Tanishaa Mukerji and mom Tanuja, glimpses of which the "Three Musketeers" shared on Instagram. Kajol being Kajol, had to share an ROFL moment from her pre-birthday celebrations. Posting a close-up selfie of herself, Tanishaa and Tanuja, Kajol, each with unique expressions, Kajol wrote she did something "impossible": "Trying to fit all three expressions in one frame is impossible! Thank you Tichi for this wonderful happy pre celebration! Love you both to bits." In the comments section, Tanisha Mukjerji wrote: "Yesss! I look so satisfied with lunch, I'm ready to pass out." 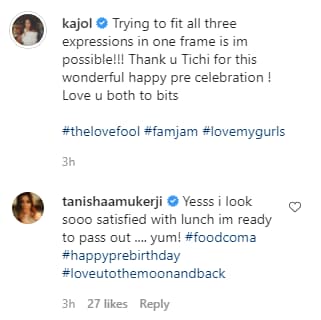 You can't sit with them - Kajol, Tanishaa and Tanuja. Here's proof. "The Three Musketeers... Always together. Us vs them!" Kajol captioned her favourite memory from today. For the pre-birthday celebrations, Kajol was stunning in a black and white printed dress, which she styled with her hair tied up in a bun.

Tanisha also posted an early birthday wish of sorts with this brief video from their pre-birthday lunch party: "Happy birthday week my darling sis! Here's to our pre birthday celebrations! Love you too much," she wrote.