Film producer Ritesh Sidhwani shared a picture from the holiday 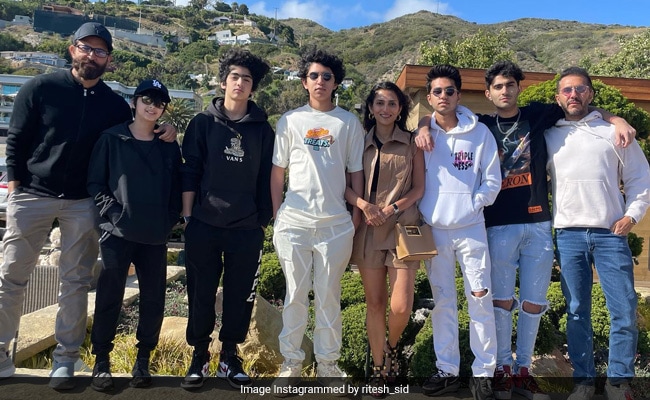 Hrithik Roshan managed to scoop some time out of his busy life and is currently holidaying in Los Angeles with his sons Hrehaan and Hridhaan. Film producer Ritesh Sidhwani shared a picture of the actor with his sons. The picture also features Ritesh's wife Dolly Sidhwani and son Arav Sidhwani. Ritesh Sidhwani captioned the post: "Meet the gang of LA." He added the hashtags #girlinthegang and #morefunlessdrama to her post. Hrithik Roshan was previously married to Sussanne Khan. They got divorced in 2014. They continue to co-parent sons Hrehaan and Hridhaan.

Earlier this week, Preity Zinta shared a post, in which she thanked Hrithik for helping her out during a long flight. She wrote: "Many people will walk in and out of your life, but only true friends leave footprints in your heart Thank you so much Hrithik Roshan for going out of your way and helping out with Jai and Gia on such a long flight. Now I see why you are such an amazing and thoughtful father. I love you the mostest . From hanging out as kids to having kids, I really am proud to see how far we have come and grown together." She added the hashtags #friendslikefamily, #travelbuddies #friendship and #ting to her post.

In terms of work, Hrithik Roshan will next be seen in a high-octane action film co-starring Deepika Padukone, which is titled Fighter. The film will be directed by Siddharth Anand. He was last seen in the blockbuster hit War, co-starring Tiger Shroff and Vaani Kapoor. The same year, he also starred in the film Super 30, which released in 2019. He will also star in Vikram Vedha with Saif Ali Khan.