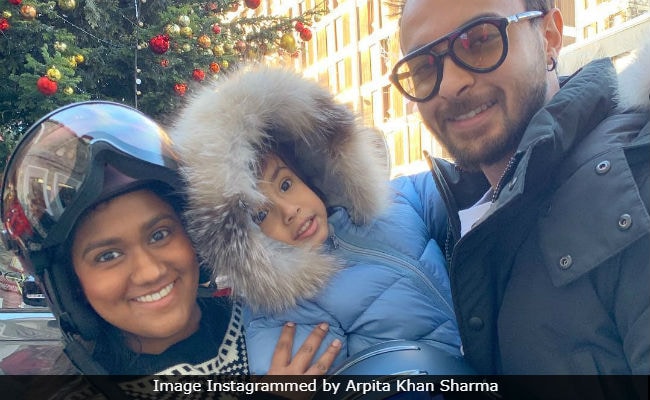 Arpita Khan Sharma might be back to Mumbai but seems like her heart is stuck in St Moritz, Switzerland (going by the latest Instagram posts on her profile). Arpita, who has been actively sharing postcard-worthy pictures from her Swiss vacation with her actor-husband Aayush Sharma and her son Ahil, treated her Instafam to more photographs from the picturesque location. She created an album titled 'Ahil's diaries' and posted multiple pictures. In one of the pictures, Arpita can be seen happily posing with Aayush, while in another photograph features the trio- Arpita, Aayush and Ahil. She captioned the post: "Ski excited! St Moritz, #ahilsdairies."

Take a look at the pictures from Arpita Khan Sharma's Swiss diaries:

In love with St Moritz can't wait to go back , plz take me back @aaysharma

Here are some more pictures from Ahil's diaries:

Arpita celebrated New Year's with her family in Paris. Arpita sent New Year's greetings in the form of an Instagram post featuring her son Ahil, who could be seen standing in front of a Christmas tree. "Holiday vibes! Paris with my little ones," she wrote.

Holiday vibes ! Paris with my lil ones

Ahil frequently makes appearances on his mother's Instagram profile and and we simply love it when that happens. Remember Arpita's Halloween special post, in which the little munchkin could be seen dressed in a wizard's hat? "When Ahil decides to wear my Halloween," Arpita captioned the post.

When Ahil decides to wear my Halloween #ahilsdairies

Arpita's social media posts frequently feature Ahil with his mamuSalman. A few months ago, she shared a video, in which Salman could be seen instructing Ahil (who was smeared with paint), to walk on the canvas. "Ahil's first painting on canvas escapade with mamu," Arpita wrote. ICYMI, check out the video here:

Arpita Khan Sharma married actor Aayush Sharma in the year 2014. The couple are parents to Ahil . Aayush made his Bollywood debut with the 2018 film LoveYatri, co-starring Warina Hussain.