Arjun wrote, “The sons and grandsons in black(almost) with the main woman of the house for Diwali.” 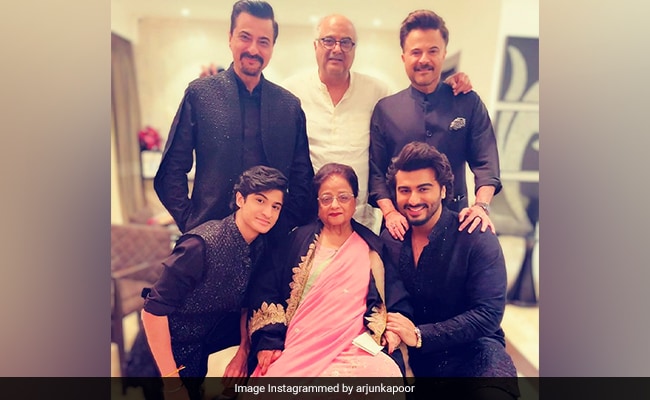 Arjun Kapoor has shared a happy picture from his Diwali 2022 festivities on Instagram. The latest update screams family goals. Here, we can see Arjun Kapoor sharing the frame with his dad, producer Boney Kapoor, uncles - Anil Kapoor and Sanjay Kapoor, and cousin Jahaan Kapoor. Well, that's not it. The “sons and grandsons” are with the “main woman” Nirmal Kapoor. It seems Boney Kapoor wasn't aware of the dress code for the evening. He is the odd one out in white. Arjun Kapoor too didn't miss the chance to mention it in his caption. He wrote, “The sons and grandsons in black(almost) with the main woman of the house for Diwali.”

For Shanaya Kapoor, Diwali is the favourite time of the year and we all agree. She blessed our feed by sharing some breathtaking pictures of herself from Diwali night. She looks regal in a lehenga set. Along with the photos, Shanaya wrote, “Favourite time of the year. Happy Diwali. Love, light, endless celebration and lots of mithai.”

Shanaya Kapoor also dropped a picture-perfect moment with her brother Jahaan Kapoor on Instagram and added evil eye and red heart emojis to it.

Anil Kapoor's Diwali note for his online family is all about fitness goals. Along with a video of himself, the actor wrote, “Working hard so I can Diwali hard. Wishing everyone a very happy, healthy and safe Diwali! Pull your loved ones close and let the warmth fill up your lives and hearts.” After seeing the post, his daughter Rhea Kapoor wrote, “Dad” and added a monkey face emoji.