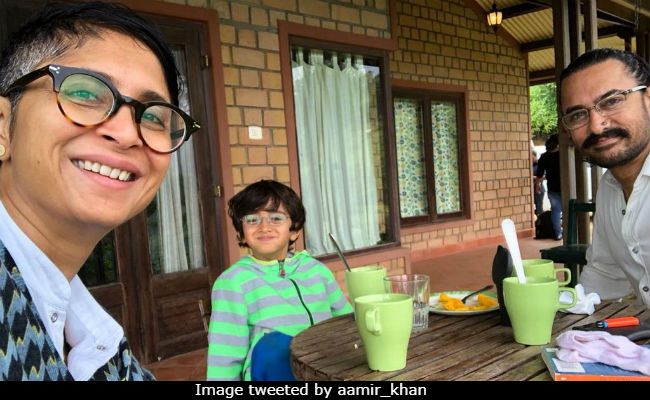 Aamir Khan is chilling in the hills (courtesy aamir_khan)

New Delhi: If you are looking for Aamir Khan, this is where you can him. The 52-year-old actor is chilling in Coonoor with his family - six-year-old son Azad and wife Kiran Rao. Aamir is in the hill station to celebrate his cousin director Mansoor Khan's 60th birthday. On Twitter, Aamir shared photos from the close-knit birthday celebrations and wrote: "Celebrating Mansoor's 60th." Mansoor Khan, Aamir Khan's cousin, is best known for having directed films like Qayamat Se Qayamat Tak, Jo Jeeta Wohi Sikander and Akele Hum Akele Tum, all of which starred Aamir Khan in the lead. Mansoor Khan is often credited for launching Aamir's career - the actor made his acting debut with a 1973 movie Yaadon Ki Baaraat but it was Qayamat Se Qayamat Tak, which turned out to be his breakthrough film. The film was written and produced by Aamir's uncle and Mansoor's father Nasir Hussain.

Aamir Khan appears to be a fan of selfies, especially when it comes to sharing photos from family vacations. This is what he had tweeted last year from the trio's trip to Rome.

Promoted
Listen to the latest songs, only on JioSaavn.com
Aamir Khan's Qayamat Se Qayamat Tak clocked thirty years in May this year and the film's cast and crew assembled at an event in Mumbai to celebrate the film's anniversary. At the event, Mansoor Khan and Aamir Khan shared interesting trivia about the movie that only a true blue movie buff would know. For example, Qayamat Se Qayamat Tak was not the original title of the film but it was 'Nafrat Ke Waris'.