In Which Katrina, Alia, Parineeti Bunny Hop and Varun Does a Cameo 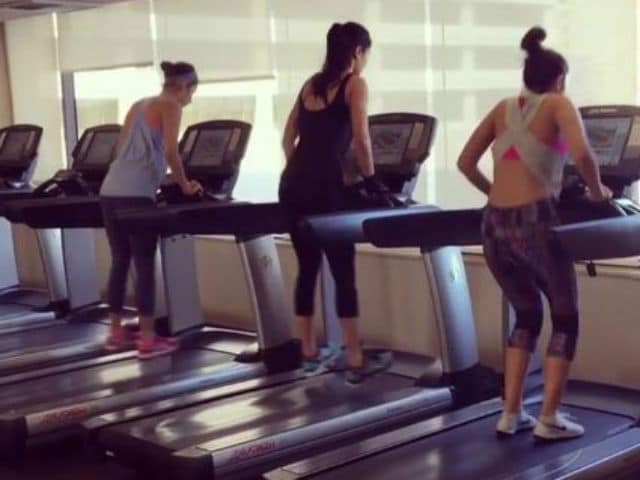 A still from the video posted on Instagram by parineetichopra

The actresses apparently did everything together during their Dream Team concert in US and Canada which started on August 13 and concluded on August 22.

Now, the Ishaqzaade star seems to have withdrawal symptoms.

How do we know? On Tuesday, Parineeti Instagrammed a video where Alia, Katrina and herself can be seen working out on the tread mill. Watch it till the end to see Varun Dhawan's swagger.

From left to right - Alia, Katy and me. Missing these 2 beautiful angels. We obviously did everything together - even bunny hops on the treadmill!! Thankyou for being the bestttt girls I love you the mostest!!! @aliaabhatt #Kat @rezaparkview

The team's fitness instructor Reza Katani was Instagramming training videos of the stars.

Check out how Varun worked on his biceps like a boss.

V ain't for vendetta but Varun. Dream team looking super Coz I got there back and they got mine @varundvn

They always weren't in the gym. Alia and Katrina did aerobics in water and taught us that when it comes to fitness, there can be no excuses:

No gym necessary, any time any place any environment and no excuses. Two gorgeous water babes and there trainer (Me) dream teams tour @aliaabhatt

Varun Instagrammed this lovely picture to sum it up.

We covered 6 cities in #usa. We found strength in each other but all this would not be possible without #teamwork. Thank you to one and all involved in making this tour a big success. Here's to many more #dreamteam