She was accompanied by her sister Samiksha Pednekar on this trip. 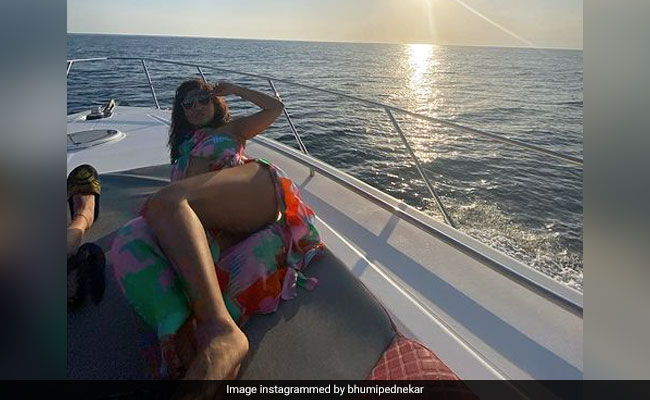 Bhumi Pednekar's vacation photos are giving us serious holiday goals. FYI: it's a throwback post. The actress' “photo dump part II” will surely beat your Monday blues. We aren't bluffing. The pictures are from the time she spent in Spain. If you want to go on a dreamy virtual tour of the picturesque country, then Bhumi's latest Instagram entry is your stop. In one of the pics, we see Bhumi enjoying a luxury boat ride. The actress also gave us a glimpse of the nightlife in Spain. She was accompanied by her sister Samiksha Pednekar on this trip. Bhumi went with an easy-peasy caption and it read, “photo dump part II”. She also added a white heart emoji to sum it up. Designer Manish Malhotra was quick to drop a sparkling heart emoji under the post. Akriti Ahuja, entrepreneur and wife of actor Aparshakti Khurana, replied with fire emojis. Actress Neeru Bajwa wrote, “Smoking”.

Are you wondering what does Bhumi Pednekar's "photo dump I" looks like? Her Instagram timeline shows that it wasn't any less fun. In an album, we see Bhumi's postcards from Budapest, Hungary. She wrote, "Vacation photo dump part I." In the photos and videos, Bhumi is munching on good food and making the most of her site-seeing tours. We also see Bhumi and Samiksha Pednekar relishing ice-creams in the summer heat. Vacations can't get any better, can they?

Pictures from Budapest are waiting for you:

Bhumi Pednekar's Instagram is now brimming with vacation vibes. In another photo, Bhumi turns into a beach babe with her brown bikini set. We can't help but adore her sun-kissed look. She captioned the photo, "En route paradise." Bhumi's photo proves that she is a perfect fit for this paradise.

Even before Bhumi Pednekar's vacation began, she was mentally travelling. We aren't saying this. It's Bhumi's photo caption. Here we Bhumi blissfully lost in thoughts. The caption read, "Mentally on a beach somewhere."

Bhumi Pednekar will be seen next in the film Raksha Bandhan alongside Akshay Kumar. She will also feature in Takht, a Karan Johar film.